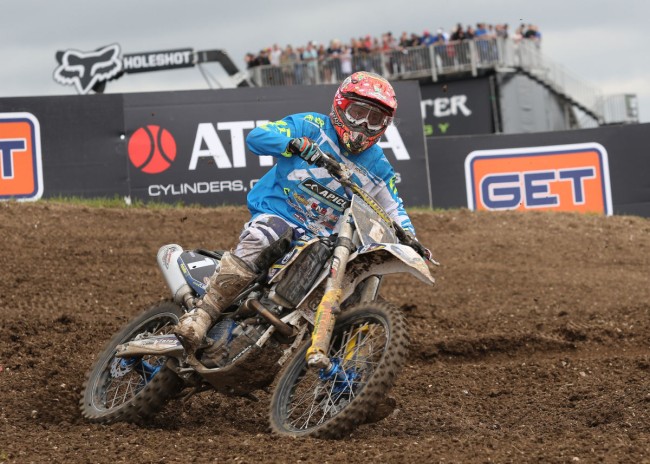 Matterley Basin hosted the fourth round of the EMX125 and EMX250 championships, both classes provided some entertaining races throughout the entire weekend. Gatedrop will take a look at some of the riders that impressed in both classes in England.

At his home GP Conrad Mewse didn’t disappoint as he rode awesome all weekend, definitely the best he has ever rode his 125 KTM. It looks as though that good result in Spain has give him the confidence that he needed and we are now starting to see the real Conrad Mewse this year. He should have won the first moto but the crash ruined it for him and unfortunately in the second moto he jumped a yellow flag so got docked ten places which was a massive disappointment as he had a massive led. It was unfortunate for the Brit but he should be happy with his speed, he put on a great performance in front of his home crowd.

After a good start to the season, Maxime Renaux had lost his way but he was back at the front this weekend. He didn’t have the speed to match Mewse but was the next best man and because of that he won the overall this weekend. He rode under a lot of pressure due to Mewse for half the first moto and held on for the win after his crash. The Frenchman rode a sensible race in the second moto to claim second which meant he won the overall, that’s good for his championship as he now only five points behind Prado, its close!

Before this weekend I didn’t know too much about Spaniard, Ruben Fernandez. He turned on the style this weekend as he finished ninth and third to take fourth overall. He rode brilliant in the second moto as he started behind the front runners but by the end of the moto he was right there with them. That will give him the confidence he needs so don’t be surprised to see him running at the front in the future, another fast Spaniard to look out for!

It hasn’t been the best of seasons for Filippo Zonta but he had a solid weekend at Matterley Basin. He managed to finish sixth and tenth for eighth overall. It’s nothing spectacular but his best round to date in 2015, it will give him something to work towards. It will be interesting to see if he can break into the top five before the end of the season on board his Ricci Husqvarna.

It was nice seeing two Brit’s make the emx250 podium at their home GP! Adam Sterry was running away with the first moto but then had a small crash which bent the bars, he then got arm pump so had to settle for second. In the second moto it looked as though Adam was playing it smart for the championship and didn’t push too hard so he wouldn’t do anything silly. A solid second and a third meant he won the overall and has the red plate back in his grasp. Only sixteen points separate the top four riders, this could be the closest emx250 championships in a long time!

It hasn’t been the best of seasons for Steven Clarke due to various reasons but he was in brilliant form all weekend. He didn’t have good starts and had to come from way back in the second moto, he started thirteenth but managed to finish fourth and had Sterry in his sites. If he had better starts then he definitely could have won his home round but it was good to see him on the podium after a bad start to the season.

A shout out to another Brit as Michael Eccles finished a superb ninth overall on board his Pheonix tools Husqvarna, which is his best result so far this season. A ninth overall in that class is very impressive, that should give him the confidence he needs to push on in the series now and get even better results.

American, Darian Sanayei got his first experience this weekend of what racing is like outside the US. He was very impressive in the first moto as he got a good start and took the win which was very impressive. The second moto went the exact opposite as he got a terrible start but managed to salvage a twelfth for fourth overall, an impressive weekend for the American. It will be interesting to see if he will stick around or go back to the US for the rest of the season.

It was a bad first moto for Damon Graulus as he crashed around the first corner which meant he had to come from last, he salvaged an eleventh place which was good under the circumstances. The start of the second moto went better and he got the lead on lap four, after that he checked out and cruised to victory. I don’t think we have seen the best of Damon yet and he is only ten points of the championship lead, he is the dark horse for the title!