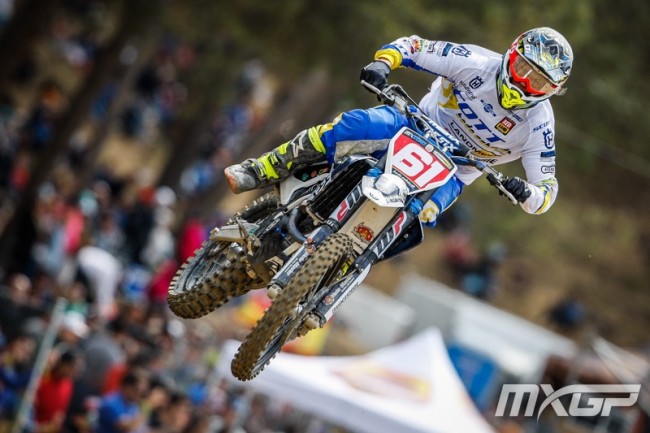 What a weekend it was for Gianluca Facchetti. The De Carli KTM rider went 2-2 for the overall victory. However, he didn’t actually get to stand on the overall step of the podium as Rubini won the GP but then got a one-minute penalty for jumping on a waved yellow flag. So, despite Facchetti winning the overall he still hasn’t experience standing on top of the box. That should give him the motivation to win another round soon. You can tell Gianluca has had a really good off-season and has worked hard, he looks comfortable on the 125 KTM.  He rides with Cairoli a lot too so that must help enormously!

Despite getting a one-minute penalty for jumping on a waved yellow flag Stephen Rubini can be happy with the way he rode in Spain. He comfortably won the first moto and had twelve seconds over Facchetti at the flag. The real test for Rubini was in moto two when he didn’t have a great start. By the time he got into second place in the second moto he was around ten seconds down on Geerts. However, the determined Frenchie put the hammer down, not only did he catch the Belgian, he also passed him and pulled away. Rubini made a statement and really wants to win this title! It’s a pity he jumped on a waved yellow as the championship lead would have extremely close. As it stands twenty-seven points separate them but with Rubini’s home GP approaching he will be motivated to go 1-1 and narrow down that points gap to Geerts.

Pierre Goupillon has shown really good speed at the first two rounds but he was more consistent in Spain as he is starting to figure out the European scene. Pierre finished fourth and third in the moto’s to end up third overall but never got to actually stand on it because of the Rubini situation. Pierre will want to stand on the podium before the end of the season and with his home GP this weekend he could be one to look out for. Pierre is now third in the championship, the best rookie of the season so far!

Ice One Husqvarna’s Mikkel Haarup has been getting back up to fitness after injuring his rib just before the first round in Latvia. Mikkel is starting to improve and Spain was his best finish in the EMX125 series yet as he finished sixth and fifth for fifth overall on the day. This leaves Mikkel seventh in the championship standings, he is having a good rookie season so far but don’t be surprised to see him get stronger as the season progresses.

A shout out to TM rider Paolo Lugana on securing seventh overall, his best EMX125 race to date! An impressive weekend for the Italian.

Thomas Kjer Olsen is riding incredibly well at the moment. He started the season being very consistent but he’s now on a roll and it’s hard to stop him winning! A dominate weekend again for the Danish rider as he went 1-1 for the overall. That’s now four moto wins in a row and Olsen is riding with a lot of confidence right now. His championship rivals had bad weekends which now means he is in a commanding position in the championship, a massive sixty-five points lead over Hunter Lawrence! The title is now Olsen’s to lose.

A fantastic round for Swedish rider, Anton Gole. He ran at the front in Germany two rounds ago and it looks to have done his confidence the world of good. Anton finished seventh and second in the moto’s for an impressive third overall. If Anton gets a good start then he knows he can run the pace at the front but can struggle coming though the pack if he gets a bad start so the starts are vital for him. Anton has been a surprise package in the EMX250 championship this year!

Last year it was Bas Vaessen’s rookie year and all his good moments came at the sand races. Spain was very positive for him, he got the hole shot in the first moto and led for six laps before Olsen made the move. However, a strong second place for Bas and he finally looked like a good hard pack rider, that is something he has been searching for his entire career. He is working with Harry and Stefan Everts, you can tell he is listening to them and putting in the work. In the second moto he collided with another rider and damaged his front break but he still came back to thirteenth. A fourth overall in hard pack conditions is very encouraging for the Dutch rider.

A shout out to German, Mike Stender who recently signed for the Castrol Suzuki team. He looks to have gelled with the bike straight away and finished fifth overall in Spain. That is an impressive ride!