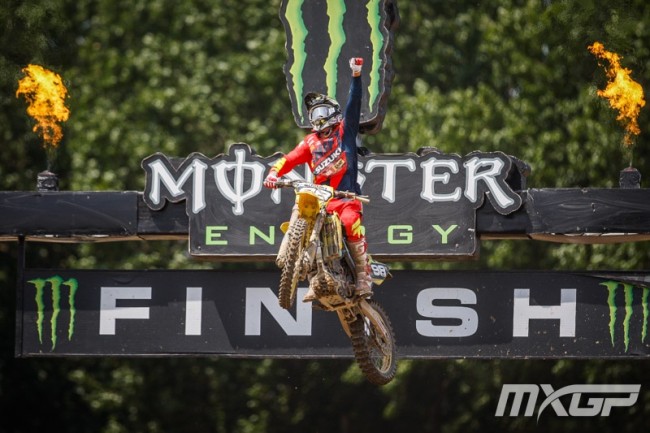 Again, what a weekend for Stephen Rubini as he took victory. This is his third overall win in a row as he looks to keep building and getting stronger. In the second moto he had a bad start but he is very strong in the second half of the moto’s. He started in seventh but worked his way into second, he couldn’t do anything about Jago Geerts who had a great second moto. Even though Rubini won the overall he only gained two points on Geerts, there is now nine points between them in the championship race. Nine points isn’t much but with Lommel next on the calendar it will be difficult for Rubini to challenge Geerts there but as we have saw so many time in motocross, anything can happen!

It was a good weekend for BUD Kawasaki as they had two riders in the top five at Mantova. Kim Savaste is very talented but has had it tough with injuries recently and has struggled to put two good moto’s together. However, finally he rode like what he capable off at Mantova. In the first moto he led for eleven laps and at one stage it looked like he could win the moto but he just didn’t have enough for Rubini, but finally he looked like a rider that belonged at the front of the class. In the second moto he suffered from a crash which hindered him but he was able to come back to eleventh.  Fifth overall for the Finnish rider is a step in the right direction, it will be interesting to see if he can get a podium in one of the remaining two rounds.

One rider I feel that is going under the radar in the class is Brian Moreau. The French rider is still just only fourteen years old and has shown some good speed this year. In Mantova he put together two good moto’s and crossed the line in fifth. This meant he ended up fourth overall, this year is all about learning as it’s his rookie year. Don’t be surprised to see him challenge for the title in the 2017 season.

It was a good weekend for Poland privateer, Szymon Staszkiewicz. Szymon has been injured for the last few years but it’s great to see him making a return to the racing scene. It’s not easy coming from Poland and also being a privateer. He started the season off well at Latvia finishing sixth overall but hasn’t showed the same kind of form since. However, Mantova was another good weekend as he prefers the sandy conditions. In the first moto he actually crashed on the second lap and was buried down in eighteenth place. However, he put the hammer down and crossed the line in sixth position at the chequered flag.  During the second moto he was eighth in behind Elzinga but just couldn’t find his way past the Dutch rider. However, he made the move on the final lap for a good seventh place.  He ended up sixth overall which equals his best ride of the year, with Lommel up next don’t be too surprised if he ends up in the top five!

Round eight of the EMX250 championship saw a new overall winner! Finally, Suzuki’s Bas Vaessen was able to put it all together to take the overall. In the first moto he had to settle for third as Sanayei and Olsen were gone by the time he got into third, however he only finished six seconds behind them to show he had the speed. The second moto went even better for the Dutch rider; he was pressuring Sanayei for the lead as those two pulled away from the rest of the pack. Sanayei then went down which left Vaessen to pick up the pieces and his first overall win in the EMX250 class. I have been really impressed with his speed this year, there is no doubt that he has stepped it up since last year. However, he does tend to still make a lot of mistakes but finally this weekend he was able to stay on the bike for the win. With Lommel up next he should be in the mix for the top step again.

Two second positions for Thomas Kjer Olsen and he extends his points lead in the EMX250 championship even further. In the first moto he was all over Sanayei and looked much faster. However, when he made the move for the lead the heat seemed to affect him so he couldn’t hold on for the win. In the second moto by the time he got into second Vaessen was gone so he had to settle for second to end up second overall. He now has a massive seventy-five points lead in the championship, definitely can’t see him losing this title now!

Another very good weekend for Anton Gole who has been the surprise package of the EMX250 championship this year.  A solid sixth in the first moto followed by a fourth in moto two give him third overall. It can’t be easy for him riding as a privateer but he has stepped it up this year and I wouldn’t be surprised to see a few teams sniffing around him for the 2017 season. Anton sits fifth in the championship heading into round nine, I wouldn’t have thought he would have been doing this well at the start of the season!

What a weekend it was for Alberto Forato!  He has shown some good speed this year but in England the weekend before he failed to score points! However, a massive improvement in his riding at Mantova and he nearly got on the box. He had a fantastic moto in the first moto for a fourth place finish. In the second moto he was all over Natzke for fifth but just couldn’t make the move on the New Zealand ride so had to settle for sixth. The Assomotor Honda rider had the same points as Gole but the Swede got the overall podium due to a better second moto finish.