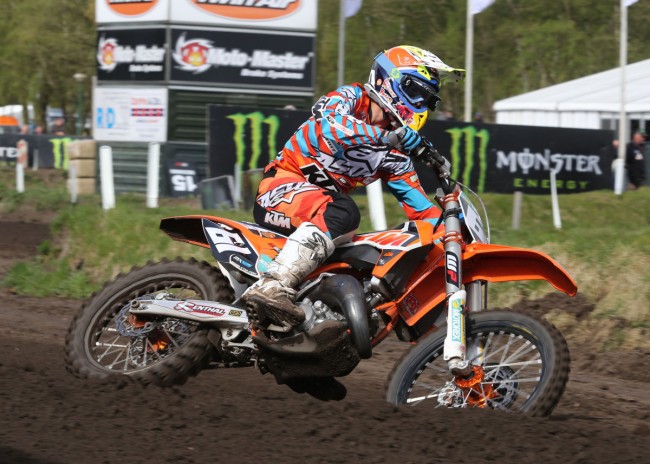 Valkenswaard hosted the second round of the EMX125 and EMX250 championships, it was time to see who has been working hard in the sand in pre-season! Gatedrop will take a look at the riders that impressed in the classes throughout the weekend.

Miro Sihvonen was able to win his first ever EMX125 overall, the Finnish kid rode awesome all weekend! He battled all moto long with Prado in the first moto but just couldn’t make a pass stick so he had to settle for a second place. In the second moto he crashed and was buried down in ninth place.  It looked unlikely he could come back and win but he put his head down, rode angry and caught Prado to take the moto and the overall victory. There is now one point between Prado and Sihvonen for the title, this could go down to the wire!

Even though he didn’t win the overall Garcia Prado took a first and a second to get the same amount of points as Miro which means he now gets the red plate! This kid is such a special talent, he is only fourteen years old so is battling guys that are a year or two older than him! Coming from Spain and already being able to win a moto in the sand shows just how talented he is. Prado could be the fastest fourteen year old the world has ever seen, the future is extremely bright for him and I am expecting him to be a future world champion!

Speed certainly wasn’t the problem for Cyril Genot at the weekend, he was running at the front all weekend but too many crashes and mistakes cost Cyril but he still managed to finish third overall. A third and a fourth finish was solid for Cyril, he crashed twice in the second moto which cost him badly as the weekend could have been better for him. I was impressed with his speed though as its clear he is very comfortable in sand, the real test for Cyril are the hard pack conditions he will face in the up and coming rounds. Cyril rides for his own Husqvarna team, its hard work being a privateer so it would be nice to see him step up in the hard pack and run at the front!

Adam Sterry has really stepped it up this year, he looked so good at the weekend and no one came close to matching his speed.  There is no doubt that Adam had good speed last year but crashes let him down, this year he looks like a new rider! I couldn’t really believe how smooth he looked, it looked like he wasn’t even trying and for a rider that crashed a lot last year, it is very impressive. Desprey had a bad weekend in the sand so Adam made up a lot of points as he won both moto’s and leaves Valkenswaard with the red plate, he needs to stay consistent now in order to win the title but it’s going to be tough to stop him now!

Top Dutchman in the class was Nick Kouwenberg, Nick didn’t have great starts all weekend. In the first moto he started sixth and managed to work his way to finish in second. The second moto was a similar story, he started in seventh but again managed to finish second and secure second overall. This was the best Nick could have managed this weekend as Adam was too fast for him but he did very well with his bad starts to get two second places. He’s also second in the championship now and ten points behind Sterry, so he will be motivated to get closer to Adam in Spain!

Top rookie in the class again went too Alvin Ostland, this kid is fast! In the first moto he started twenty third and got his way back to seventh place, that’s some going in a class as stacked as EMX250! In the second moto he got a much better start in second and stayed there until the last lap when Kouwenberg passed him, there is no shame in that though! Alvin is learning fast in that class and I have no doubt the other rookies will be running at the front soon too. It wouldn’t surprise me if Alvin is on a good team next year for the GP’s as he has what it takes to be a GP quality rider!

Swedish privateer Ken Bengtsson really impressed me with his speed at the weekend, I knew he was good but didn’t think he could do that well! He was solid all weekend and finished fourth and fifth in the motos to end up fifth overall, that is very impressive! He didn’t do the first round in Italy as he had a small injury, he will maybe regret not doing the first round now! If he can show this kind of speed in the hard pack then I will be very surprised if a good team doesn’t sign him for the 2016 season, this guy is good. Yes, he’s from Sweden and Bengtsson is his surname but he is not related to Filip, but Sweden definitely have another Bengtsson to get excited about!

A shout out to Bas Vaessen who ended up seventh overall, the rookie has always shown good speed in the sand. If the Rockstar Suzuki rider can get results like that at the hard pack tracks then it will be impressive.