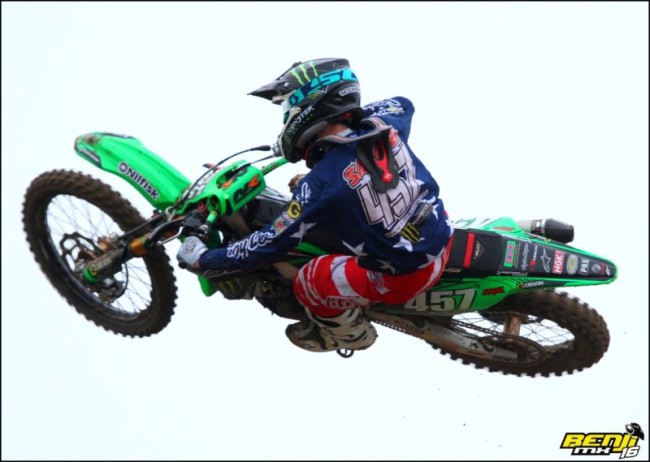 The French crowd were out in full force for the MXGP of France and were treated to some great racing. We take a look at the riders that impressed in the EMX125 and EMX250 championships.

The French crowd were expecting big things from Stephen Rubini as it was his home race. After getting a one-minute penalty in the second moto in Spain he had all the motivation he needed. However, would he crumble under the pressure of performing in front of his home fans? The answer is quite simply – No.  Rubini excelled and rode awesome all weekend, he simply dominated the event and went 1-1 for the overall.  He has now got the championship points lead down to thirty points, the pressure is on Geerts in England! He needs to respond to Rubini’s title threat.

Rubini wasn’t the only French rider the home fans got behind, Pierre Goupillon also put on a great show and gave them something to shout about. A fourth and a third position in the races meant he ended up third overall, his first overall podium in the class. Pierre keeps improving and has been the surprise package in the class this year.

Another Frenchie, Zachary Pichon has had a few bad rounds with bad luck and not putting in the rides he is capable off. However, he just missed the podium at his home round with a fourth overall. The MJC Yamaha rider didn’t have the best ride in the first moto with an eighth place. However, he was much improved in the second moto and crossed the line five seconds behind Rubini in second. A step in the right direction for Pichon, Matterley Basin is next on the calendar and he rode their last year so will know the track which should help him.

Two riders that are going under the radar in the class but showing good speed are Kevin Horgmo and Luka Milec. Kevin from Norway ended up sixth and ninth in the moto’s for an impressive seventh overall. Luca from Slovenia had a solid weekend ending up eleventh and tenth for eighth overall. Luka works with former GP rider, Roman Jelen, he is one to look out for in the future. It’s not easy coming from Norway and Slovenia so props to those guys with their good results.

Finally, Darian Sanayei was able to put it together for two moto’s and come away with the overall! Darian won both the moto’s and rode excellent in the second moto after some pressure from Olsen, he was able to pull away. A great overall win for Darian as he lives in France and rides for a French team in BUD Kawasaki. Next up is Matterley Basin were Darian made his debut last year and won the first moto. Don’t be surprised to see Darian repeat his success in the UK and take another overall victory.

Another good weekend for Suzuki rider, Bas Vaessen. The Dutch rider is really starting to look comfortable in the hard pack conditions and that is pleasing to see.  He described the first moto as ‘messy’ but he made up for it in the second moto by crossing the line in third. He just needs to find around another second in hard pack and then he could be battling for race wins with Olsen and Sanayei.

French EMX250 rookie, Mathys Boisrame has been getting to grips with the 250 machine and rode really well in front of his home crowd. He was sitting comfortable in fourth position in the first moto – only for the bike to stop, a disaster! However, in the second moto he rode just as well and the bike didn’t let him down this time as he crossed the line in fourth. If he didn’t suffer from a mechanical in the first moto he would have been third overall. He has the motivation to get on that podium now more than ever after being so close.