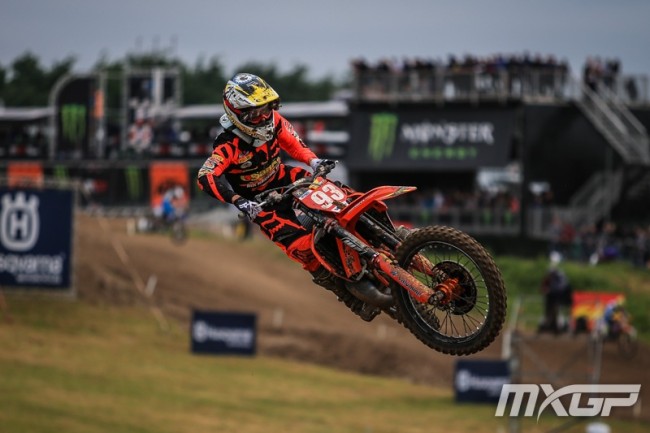 Silver Action KTM rider, Stephen Rubini put on another fantastic show and took the overall win at Matterley Basin. In the first moto he had a good start as he was in third at the end of the first lap. He was able to pass Zanotti and then set his sights on Geerts. He was able to close in on the Belgian but he didn’t have enough time to really get onto his back wheel, Geerts rode well to grab victory in moto one. In the second moto, Rubini didn’t get the best of starts down in seventh position. However, as he so often does he worked his way up. With three laps to go he made his way past Horgmo for the lead and the overall.  Rubini gained two points on Geerts and there is now eleven points in it, all to play for!

Jago Geerts got a good start in the first moto and led the entire moto, he didn’t allow Rubini to catch him which was important for his confidence and he upped his level in hard pack conditions which was pleasing to see. The second moto was an even better ride for Jago as he was nearly last around the first corner! With the championship on the line he could have crumbled but he rode like a man possessed and got right back to third position – an incredible ride for the Belgian. The fact that Rubini only gained two points on him and under the circumstances Jago will be happy with that second moto ride. With sand races coming up there is no doubt Jago will be strong and very hard to beat in those conditions, anything can happen but you have to fancy him for the title at this point.

The one rider that really surprised me this weekend was Norway’s Kevin Horgmo. A ninth in the first moto was very solid and a good ride for him. However, he had the race of his life in the second moto, he got a brilliant start in third and then passed Facchetti and Goupillon for the lead. He managed to break away from those guys which was a very impressive ride, I really wasn’t expecting that. He looked very comfortable at the front and didn’t look to be riding on the edge which is pleasing to see. Only the sheer speed off Rubini stopped him from taking the moto win but a second place finish is a brilliant result. He just missed out on an overall podium but he knows he’s got what it takes now! I am sure plenty of teams will have noticed that performance from the privateer and could try to snap him up.

A shout out to Taylor Hammal who had a brilliant second moto to cross the line in ninth place in front of his home fans. There is a lot of talent in that class so he can be more than happy with a ninth place and that gives him something to build on.

A fantastic ride from Steven Clarke to win the EMX250 round in front of his home fans. He wasn’t even supposed to ride but he got a last minute entry.  He didn’t have enough for Sanayei in the first moto but in the second moto he was able to break away and won by two seconds over the American. Sanayei was looking strong all weekend and I wasn’t expecting to see Clarke take the win but he proved me wrong and upped his game in the second moto.

Another very good weekend for Darian Sanayei, he was too strong for Clarke in the first moto and ended up winning by five seconds. He put a lot of pressure on Clarke in the second moto but in the end didn’t have enough. However, he cements second place in the championship now which is a good first year racing the EMX250 class.

A few days before Matterley Basin, Nicolas Dercourt parted ways with his BUD Kawasaki team. He was riding a privateer KTM in England and he was absolutely flying – he had his best weekend yet. He ended up fifth and fourth in the moto’s for fourth overall which he will be over the moon about especially after a difficult week leaving BUD Kawasaki. If he wants to get another ride with a good team putting in results like that will certainly help his cause.

A shout out to Ruben Fernandez who is having a rookie year in the class after moving up from the EMX125 class. He ended up ninth and sixth in the moto’s for fifth overall which is his best round to date. He seems to have started gelling with the Kawasaki 250 well so he could be one to look out for in future rounds.