Eli Tomac – I don’t want to be playing catch up any more! 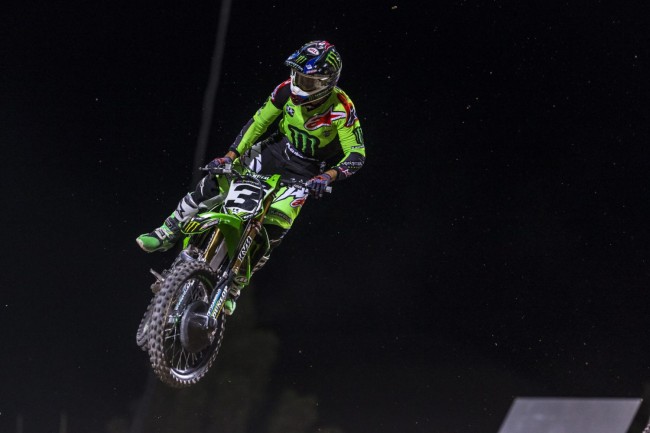 The quietly confident Tomac isn’t a showman like some of his rivals but he is very determined and ready to get 2018 under way.

Tomac caught up with Steve Matthes on the Pulp MX show to talk about the upcoming supercross season as well as the MXoN at the end of the year.

To listen to the full interview with Eli as well as interviews with DV and Jake Weimer plus general supercross chat, listen here.

See what Tomac had to say on a number of topics below:

Off- season prep: My bike is very similar to last year, it’s a piece of mind knowing what I am working with. It was a really good bike last year so there was no reason to go hunting down anything else.

The biggest change was having Jeremy (Martin) having a guy there has been good. Jeremy has been pushing me a lot. It’s pretty incredible what the guy can do off of a motorcycle and on a bicycle, in the gym and running – he’s an animal for sure. I have been getting pushed past my comfort level, which has been good for me.

Aldon Baker training program not for him: I have thought about that, there is no way I would go out there and ride with three or four of the top guys. Certain programs work for certain guys, for me it would be almost too much of a competition, if you have one guy yeah, but three or four it would be a gnarly contest every day.

On being quiet on social media: I wanted to treat my off season as a real off season. I was just doing my thing in Colorado. I had an off season too without my phone (social media) and all that. Everyone has their thing, I am not going to go out and post a load of videos of myself because to me that is showing your competition if you have a technique or something new. You are giving anyone an advantage. I like to keep it low key, you are racing those guys for your career so why do you want to show those guys some technique in the whoops on your phone you know?!

On the season hype: For me it’s changed over the years, the last year I have been able to do my own thing and not worry about them. You never know who is going to bring what, we do our thing at home and bring it to the race. We won a lot of races last year, I think we are the guy to beat this year.

On being available for the 2018 MXoN: It’s at a time if the year we can do it, the Nationals end at the of August. The Nations is in October so that gives you some time off. There is time to take off and have a legitimate off season and still go race it. Then you have Monster Cup the next weekend, so no excuses from me this year.