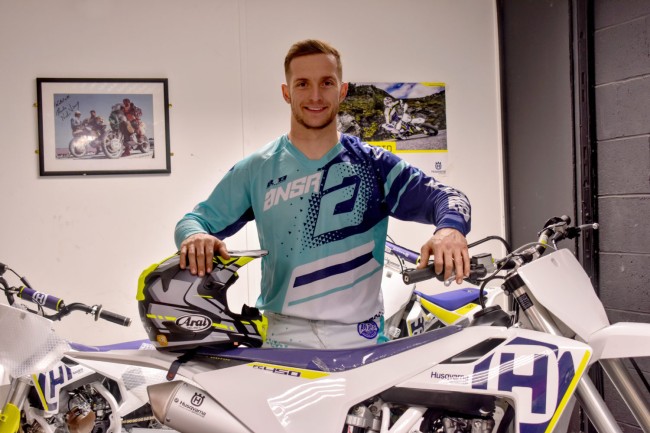 Apico Husqvarna will have a new rider under the awning for the 2018 season. The team will be working with Stuart Edmonds who recently made the switch to the Husqvarna brand. Edmonds, an Irish Des Nations Favourite and one of the regular top 10 runners in the MX1 British Championship, will join Matt Burrows for 2018 competing in the British Maxxis MX1 Championship and MX Nationals MX1 Pro Class Championship.

The team, now into its 4 year, has fielded a host of British talent in previous seasons including Steven Clarke, Bryan MacKenzie and Jamie Law. Now with Edmonds and Burrows pairing, the team hope to continue the recent form of top championship finishes inside the MX1 top 10. Team Manager Sean Burrows hopes to repeat some of the successes of 2017 now with Edmonds.

Sean Burrows: “We’re happy to have reached a deal again with Apico Factory Racing as the main sponsor of the team and feel after last season and positive steps in the right direction we can improve on our final season places in 2018. Stuart is a very experienced and talented rider, and will add a great dynamic to essentially what is a family team.

Dylan Brown: “We’re glad to have Stuart on-board for 2018 in what is shaping up to be a positive looking motocross season for Apico Husqvarna. We are sure Matt will also play a strong part in the season and are confident of finishing top 10 with both riders in one of the strongest MX1 line ups of recent years.

Stuart:” I’m really pleased to work with Apico Factory Racing for the 2018 season. The excitement of a new bike is one thing, but to be working with a group of such passionate people in UK motorsport in an honour. I have a fantastic group of hard working guys by my side for 2018 and combined with Apico Husqvarna it will give me all the tools I need to put me and my Husqvarna FC450 on the box. I truly believe I can do it and am lucky to have people who believe in me 100 percent. I just need to keep working hard and produce the results we always strive for. I would like to thank Dylan, Scott and Sean for the opportunity to represent the team next year”.