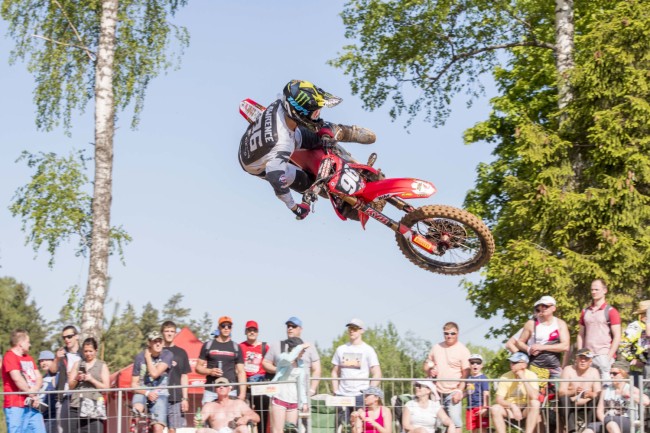 After the fantastic weather on the mainland, the dismal overcast conditions came as a surprise when the team reached Desert Martin in Northern Ireland. With sporadic downpours both Saturday evening and Sunday morning, qualifying was tough on the smoothly graded track for Stuart and Jamie. Both riders prefer the rough, more technical conditions they knew they’d face as the track changed during the days racing.

As the gate dropped both riders got away very well, with Stuart being one of the front runners in the hard-charging pack. Jamie was locked in a battle with Tony Craig for most of the race where he was hard to pass on the mostly single-lined track. Stuart lost a few positions at the mid-point, though soon got his rhythm back and cross the line in an impressive 5th place, with Jamie finishing a hard fought 11th.

Race two saw Jamie take the lead start between the Apico Husqvarna’s, with Stuart 6 places behind in 16th. Jamie managed to maintain his position and gain a place with the retirement of a rider to finish 9th. With Stuart pushing forward to finish in 12th position, both riders had a solid weekend finishing inside the top 10 MX1 overall.

Jamie “A better weekend for me despite the lack of sleep fatherhood has gifted me, though I wouldn’t change that for the world. Pleased with my performance overall, though will work on some prepped tracks during the week as with MX1 practise being first, my speed could be improved on a flat track”.

Stuart “As near to home as I’ll race in a British Championship, the crowd and general support I receive are still second to none after all these years racing. I was really happy with the first race, unfortunately, in the second I didn’t quite get the jump and had to work hard to get back up to 12th. Though after a hard lead up to race day and qualifying glad to come away with 8th Overall.

Dylan “I can appreciate Stuart’s monthly journey now having made the trip over in the Apico Team Vehicle! The bikes didn’t miss a beat all weekend and considering both riders crashing and having a tough qualifying session, they really did pull out the stops in the races. We wish Zac Stealey a speedy recovery from the crash he had in the first race and didn’t feel able to ride in the second race. Overall, I’m happy to come away with 8th & 10th overall and looking forward to having the full team line-up back for Hawkstone”.