Edmonds and Law on Foxhill 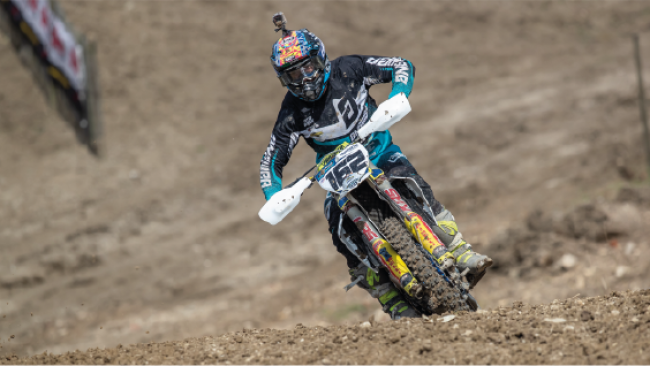 The team set up at a blustery Foxhill MX Track for the penultimate round of the Maxxis British Motorcross Championship mid-Saturday afternoon. The conditions were testing straight from the off, and after almost losing a canopy roof to the wind, we managed to get everything together and settle in for the evening with a fantastic team meal. Thanks to Karen, Mandy, Anna & Sue for arranging a great spread!

Sunday Morning qualification in MX1 went well with Stuart inside the top 10 and Jamie up to 13th by the end of the session, with both riders managing a clean fast lap and decent gate pick. Unfortunately, Zac struggled to find space to put in a quick lap. In MX2 Matt timed it well getting one of the first times on the board ending the session with 16th gate pick.

In the first MX1 race, Jamie managed to keep a tight line into the first corner. This got him into 8th position and he managed to make a pass to 7th before having a few battles and getting arm pump finishing 9th. Stuart had a mid-pack start and managed to reach 12th position while still moving forward before the race was red-flagged. At this point the race was deemed to be past the halfway point by the officials, so that was to be the end of race 1.

Race 2 was filled with tense moments. Jamie rolled the first corner which left him a little wide and in 12th as the pack came through the new technical section entering into the valley with Stuart behind him in 17th position. Stuart was pushing hard and made a small mistake forcing him to restart last on the second lap. He managed to make some places back to 18th at the flag, though admittedly made it hard for himself. Jamie managed to break into the top 10 before defending his position, having battles with John Adamson & Lewis Trickett. The trio traded places before Jamie made the final push on the last lap to finish 10th in the race and 10th overall on the day. Zac had an unfortunate couple of races, not managing to get his rhythm going in either contest and finishing outside the points.

Matt got a good jump off the gate in MX2 race 1, coming into the first corner with Gilbert, though was then pushed wide into a mid-pack position. A few tough laps followed where Matt didn’t find his flow and struggled with arm pump, finishing 16th at the flag. The second race started off well, with Matt in 11th for the first couple of laps, though after struggling to pass Carlton Husband he decided to try a different line choice on the tight inside right entering the famous uphill section of the track. It was here the deep ruts unseated Matt and he went down losing a brace of places in the process. Matt still persevered and managed to get a couple of places back and finish 16th position.

Jamie Law: “I had a reasonable qualification, then in the first race, I had a good run tight to the inside and managed to maintain 9th even with arm pump in what turned out to be a short race. In race 2 the start wasn’t as good and I was pushed wide around the first corner, I made my way back inside the top 10 and then rode last half the race quite tight though I managed another top 10 finish and 10th overall on the day so happy with that”.

Stuart Edmonds: “I had a mixed day, with a mid-pack start in the first race, just as I started to make some positions the race was red-flagged, and I finished 12th. The second race I was inside the top 20 and started to get a little frustrated with not coming through the pack, made a mistake and came off to dead last. I persevered and pushed on to get back in the points and finish 18th at the line for 16th overall”.

Matt Burrows: “The first time I’ve scored points in both races since I’ve come back from injury. I made a couple of mistakes in both races and that cost me quite a few positions. I had a much better second race, the results don’t show that, though it’s another learning curve and I’m moving forward to make things better at Landrake”.

Dylan: “Some mistakes made over the course of the day, though as a team the riders showed determination and didn’t give up, pushing right up until the flag. Jamie had a good day, and Stuart & Matt lost positions due to small crashes. I think they are all capable of better places in the races and we just need that to come off at Landrake for the end of the season. We have a great team atmosphere and have fun. That said, when the gate drops, I know the lads are trying their hardest to push for the best results. I can’t ask any more than that”.