Edmonds and Kinsella on Birmingham Arenacross 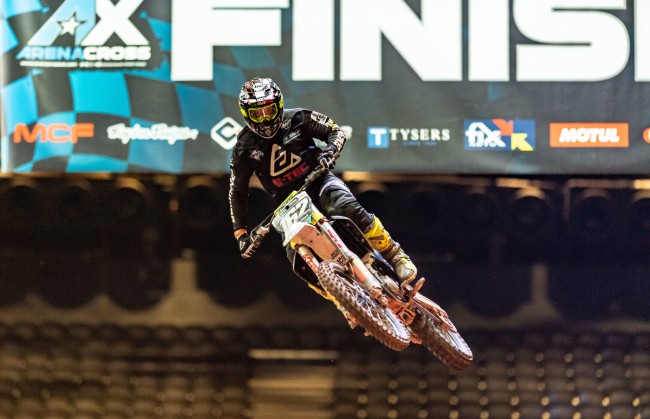 The Arenacross Uk tour headed to Birmingham Resorts World Arena this weekend for rounds 3 & 4 of the 6 round championship, With a different mix of riders altogether compared to Belfast! The E-Tech, Apico, CCM Team Riders of Stuart Edmonds, and the 10 year old Jordan Kinsella, Took to the stage and continue to show the arenacross crowds what they are made of in 2020.

Unfortunately speaking to Jordan Keough after his injury in belfast, He had to miss Birmingham, But is set to return for Wembley in a few weeks time. First up out on track this weekend was Stuart, Which he seemed to get to grips with the bike and the track fairly quickly. Putting in some impressive first laps, He qualified 8th on the Friday session, and heading into the night show, Which gave him a P9 and a P3 which put him straight into the Superfinal!

“I had a great weekend at round Three and Four on my E-Tec Apico CCM racing fc450. With the adjustments made by Karl Anderson on my suspension it really gave me a boost of confidence on racing the track. I managed to get into the superfinal but after a  little crash half way into the race that resulting in a late night hospital trip but I still managed to finish. Saturday to me was my best day of riding but I made too many silly mistakes and it wasn’t meant to be. I am looking forward to wembley to show my speed and get myself into both superfinals and push towards a top 5 finish in both”

Up next was our youth rider Jordan Kinsella, Who had a fantastic weekend, Regardless of a little tumble on Friday evening which resulted in a trip to the medic room! Speaking to Jordan, He explained his weekend.

“My weekend at Arenacross in Birmingham was great! Im learning more and more as these rounds continue.  So the mornings practice and qualifying wasn’t really going the way I wanted, But with Race One on friday I crashed on the second lap and hurt my wrist a bit, but I managed to pull it back together with a 10th so i was happy! The same thing with Saturday mornings qualifying and practice but no crash and I pulled it back together again for an 11th on the evenings race.”