Edmonds and a returning Jamie Law on Lyng 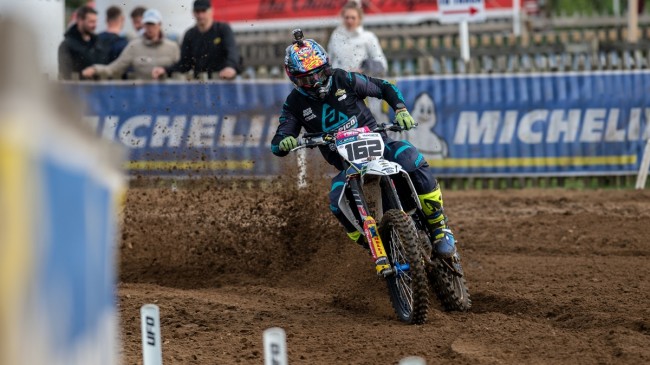 Round 3 of the Michelin MX Nationals saw the Apico Husqvarna team head back to the Lyng circuit in Norfolk. The meeting saw the return of Jamie Law to racing alongside Stuart Edmonds while Matt Burrows sat on the side-lines with his injured ankle.

The qualifying session saw Stuart and Jamie both head out on track and set a number of fast laps as the track developed and the times got quicker. At the end of the session Stuart finished 9th fastest with Jamie 12th in MX1.

The opening race saw Stuart make a good start but he struggled to find his rhythm and slipped back a few positions. Jamie also started just outside the top 10 and was moving forward when he crashed and collided with a Marshal point and ended his race. As the race continued Stuart settled into the race and finished 8th in the MX1 class.

Going into the second race Stuart was looking to improve while Jamie was hoping to recover from the opening race crash. After good starts both riders were inside the top 10 and pushed forward with Stuart getting into 8th and pushing for a top 5 but a slight issue with the bike saw him have to settle for 8th place and save the bike. For Jamie it was to be a solid race finish of 11th place after the heavy crash in the opening race.

Stuart Edmonds – Qualifying went better than normal after getting caught behind a couple riders at the start, I managed to get one good lap in to secure 12th. Race one I had a great start and I pushed hard in the opening laps but then ended up making so many silly mistakes losing my rhythm but managed to hold 8th place. Moto 2 I didn’t have the best of starts but managed to push hard in the first lap to make some passes. I caught up on a group of riders that held me up for a few laps but once I got through and into 8th I started making a charge on 6th and 7th. Mid moto I had smoke out of the bike and my mechanic informed me on the board so I had to nurse it home from then onwards. I still managed to catch up on the two riders and was just unfortunate I had to let of midway. Each week I’m building and I just have to stay on that path now. I would like to say a big thanks to Laurence for coming over and also to Tom for driving me and the crew this weekend, I would be lost without them. I look forward to making more progress and hopefully knocking in the top 5 results soon!

Jamie Law – It’s good to be back at the races. I struggled with a crash in the first race where I hit a Marshal Point and took a big impact to the elbow so had to have some stitches. In the second race I didn’t ride the best and lost a few places with a mistake in the last corner and finished 11th. I now have a couple of weeks to get things sorted and ready for Blaxhall.

Dylan Brown – Team Owner – Apico Husqvarna travelled south for round three Michelin MX Nationals at Lyng, Norfolk. With Matt Burrows side-lined due to a broken ankle and Jamie returning after a couple of weeks recovering from a knee injury. Jamie Law and Stu Edmonds had a pretty good day considering and you can see each time out things are starting to make progress although the overall results don’t reflect the efforts put in during the week. Hopefully we will see all three riders line up for the next Maxxis British Championship round at the ever popular Blaxhall track in a couple of week’s time.