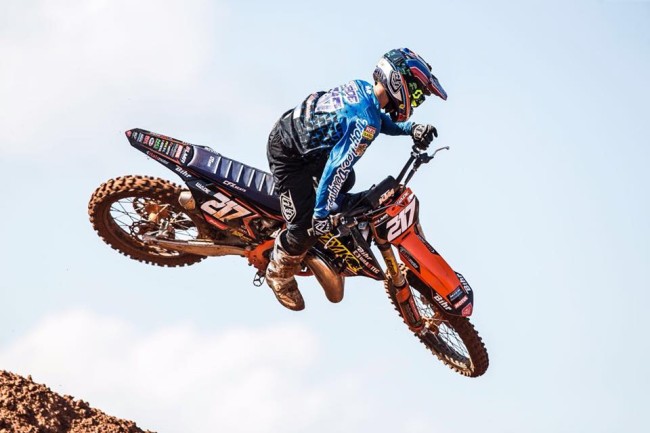 The 85cc World Champion, Eddie Jaywade has secured his future. The talented Brit will contest the EMX125 season as a rookie next year and has signed a deal with Spanish based team Jezyk Racing Team.

The team have had some success in the EMX125 series with Sergi Notario López. The Spanish rider finished sixth in the series this year in what was a good season for him.

The team will hope Eddie Jaywade can learn as much as possible during the 2018 season which will be a rookie year for him in the class.

Fingers crossed Jaywade has a bright future ahead of him. He will hope to follow in Steven Clarke’s and Conrad Mewse’s footsteps who also won an 85cc World Championship title.

“I am so excited for next year with the backing direct from Austria and the added support of JEZYK Racing Team I feel they are the best team to help me achieve my goals. They have a fantastic infrastructure and technical know how to allow me to compete in Europe and Spain, with the added bonus that they have a base in Holland which will enable me to train in sand.

Although I am still training RMJ I will also be able to hook up and train with the other KTM factory youth squad various times throughout the year and am able to keep most of my sponsors who have stuck by me over the years. I hope it can be a solid season. Now I have to start working hard to be fit and fast enough for next year after my yearly two month break.

I would like to say a massive thanks to KTM for having faith in me. Antonio and Paco at ZambranaMX in Spain for my bikes the past couple of years. Mark at MJW specialist they don’t call him brains for nothing. Ktech their suspension is simply the best. Rock Oil products are outstanding. Michelin keeping me on track. Racebikebits, Samco Sport, CISport, CTI knee braces, TMDesigns Ltd, CFX seats, Eurotaff mouses, Apico, RedSand, Talon, Richard Mike Jones, Ashley Wilde and Paco Rico”