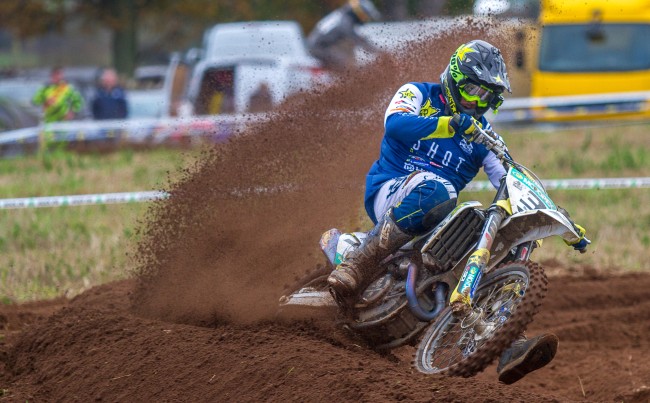 The opening round of the 2019 Rock Oil Michelin Ecosse XC Winter MX Championship, supported by Wulfsport and Drysdale Motorcycles kicked off in fine style last Sunday with packed grids across all classes.

Some 250 competitors across adult, youth and quad classes turned out to contest the nine sets of three races, all comfortably shoehorned into a packed programme that ran smoothly and ahead of time. Such was the precision-style running of the event that it managed to observe a respectful minute’s silence bang on 11am, extend the length of both adult and youth afternoon races and still finished at 3.30pm. Despite a significant deluge of the wet stuff prior to the weekend, the all-weather track was unaffected, proving to be challenging yet with plenty of passing places to keep things interesting.

The A class welcomed a late entry in the form of Billy Bolt who had heard about the standard of racing in the Ecosse series and decided to give it a go. He won the overall on the day, taking two wins and a second. He didn’t have it all his own way though as he had Kacey Hird, Dan Stalker, Ryan Thomson and a young Sam Atkinson on a 125 to contend with. He enjoyed a straight flag-to-flag win in the opening moto but found himself at the back of the pack in the second, meaning he had to work his way through the field to secure second behind Hird and in front of Stalker. It was business as usual in the third race when he won ahead of Hird with Thomson third. However, 16-year-old Atkinson was all over the front runners in both the second and third races, finishing fourth in both and fifth overall.

Over 40 riders packed the B-class grid. Close racing out front saw Paul Benham take the first two wins but a troubled third race saw him towards the back of the class on the first lap and two laps down at the end, relegating him to 11th overall. Ryan Johnson took the third race win and the overall whilst Jordan McDonald and Dean Mackenzie rounded out the podium. With another crammed line-up of riders, the C group victory was taken by Connor Wilson with two wins and a second. He was followed by Stuart Wilson with a fourth, fifth and the other win and Stephen Humphries with a third, fourth and third.

The mixed Vets and Rookies threw up a few surprises. Tom Grant took three class wins to lead the Vets overall ahead of Gordon Morrison and Craig Smith, however, the younger riders were leading the way on the track. Grant won the first race with Rookie Shay Page second but come race two and the Rookies were unbeatable with the top six places taken by Oliver Barr, Page, Josh Buchanan, Jack Winthrop, Charlie Henderson and Logan Ferguson, with Grant in seventh. Barr, Buchanan and Winthrop again featured out front in race three, with Grant leading the Vets in fourth. Barr took the overall Rookie win ahead of Page and Buchanan.

In the youth ranks, the BW85 category was won by James Barker with a second and two wins. Jay Cheel posted a win and two seconds to take second overall, and Hudson Roper three straight thirds. The SW85 riders upset the BW order of play somewhat with SW overall winner Billy Askew, second Ryan Waggot and third Bradley Johnston all featuring in the leading pack out on the mixed-class track. Askew was fourth in the first race, third in the second and then really threw himself into the third 85cc moto by charging his way from sixth on the first lap to the lead in the closing stages of the race. He took a tremendous win just over a second ahead of BW85 Barker. In the youngest group, the 65s, there were three different victors, with the overall podium winners of Jamie Prentice, Leo Self and Jaxon Haswell taking a win apiece.

The quad side of things was multi-faceted as not only were they racing for round one of the Ecosse Winter Series, but also round five of the Quad Racing Scotland Championship and, just to shake things up a little, whoever claimed the first race holeshot was guaranteed a free entry to the next round.

A tight posse rode into the corner of race one and Murray Graham emerged victorious. He had fellow QXoN British teammate Oli Sansom and the fully recovered Ayrton Knowles hard on his heels. Two thirds of the way round the first lap, Graham and his quad parted company in dramatic style when a rut caught him out. He was fine, but a tyre came off the rim in the accident, leaving him to limp back to the pits. Sansom took the lead followed by Knowles and Michael Brewis. By lap three, Brewis passed Knowles to move into second and held it to the finish behind Sansom, with Knowles third.

Race two saw three leaders within the first two corners. Brewis, Knowles and Graham all swapped positions more than once on the increasingly challenging track. Sansom sat behind them all, but by the end of lap one he had passed Knowles to take third and was on to Brewis. As Sansom steadily stretched his lead, the closest racing was between Knowles and Brewis, Knowles pursuing the Scottish Champ for six laps before finally getting past when backmarkers came into play. Sansom won, followed by Graham and Knowles.

The final moto again saw Graham take the holeshot and he led the pack before Sansom made a successful pass, guaranteeing his third win of the day. Graham and Brewis held second and third for the duration while Knowles rode a lonely race in fourth.

In the QRS Championship, the battle was between leader Graham and third-placed Brewis. Despite his DNF, Graham managed to retain his lead of the championship, while Brewis moved into second place.
Richie Cornett, who finished ninth overall in the Winter Series opener had the show to himself, taking maximum points in the Over 40s class. In the Adult Supports, Peter MacGregor’s two firsts and a third brought him within 38 points of class leader James Nisbet while JJ Readman got one more point than Davey Nixon, leaving him only three points adrift of third place going into the final round.

A special mention goes to Sean Doherty who painstakingly watched all starts to determine and award the holeshot prizes as well as the hard-working ‘behind-the-scenes’ Ecosse team. The organisers also want to thank all riders for leaving the venue relatively litter-free – an important matter when it comes to retaining such great venues for future use.