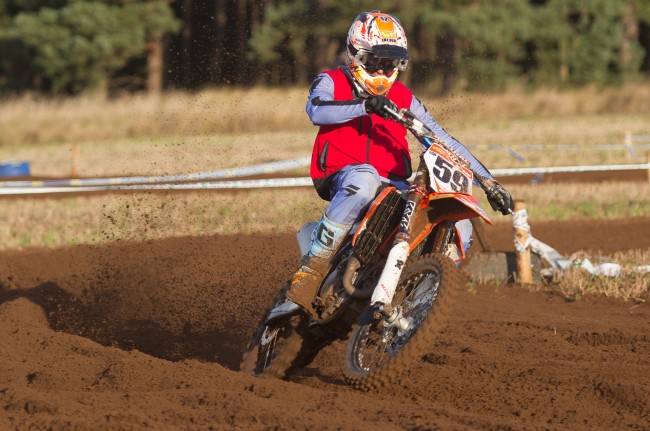 Round two of the 2019 Rock Oil Michelin Ecosse XC Winter MX Championship, supported by Wulfsport and Drysdale Motorcycles continued to prove its popularity with full gates across all classes.

Showers with sunny intervals were the order of the day. Whilst an early morning heavy downpour delayed the start slightly, it didn’t cause any major impact on the race schedule which ran swiftly and was completed by 3.30pm.

Thirty-four hard-charging competitors lined up for the A class which was dominated by John Robson. In a masterclass of motocross racing, he nailed the big berms to win all three motos ahead of Kacey Hird who took two seconds and a third, with Ryan Thomson in hot pursuit, posting a fifth, third and second to secure third overall. Also in the mix was Sam Atkinson, with an incredible fourth overall on a 125cc. He struggled with the starts against the more powerful machines, but he picked his way through the pack in each race to finish sixth, fourth and fifth. Danny Stalker, who finished seventh overall, took third place in the opening race.

Ben Stanley took three wins from three starts in the B group. In second overall, Dean Mackenzie followed him across the line in the first two races and took third in the final outing, swapping with third overall Steven Lennie who posted a third, third and second. There was another hundred per cent finisher in the C class, which was bursting at the seams with over 40 riders on the start line. Dylan Grieve did the winning ahead of Stuart Wilson in second and Barry Smith in third. Jed Barker’s third place finish in the last race was enough to boost his position to fifth overall.

In the popular Vets category, overall winner Tom Grant, Brian Alexander and Scott Murray enjoyed close racing in the first two motos but, with both Alexander and Murray failing to start the last moto, Peter O’Neill and Alan Thain were in a good place to secure the second and third overall placings. Shay Page was the runaway winner in the Rookies and showed true grit in the third race, moving steadily through the field from 14th on lap one to take the overall win on the track. He had Josh Buchanan and Charlie Henderson keeping him company at the top, with Oliver Barr taking second in race two.

Over in the youth classes, Ayden Smith was the one to beat in the BW85 group, with Jay Cheel and James Barker taking second and third on the day. Cheel finished with a third and two seconds, whilst Barker took a second and third but, despite pulling through to the front on four occasions in the third race, he finished 13th. Hudson Roper rounded out the race three podium. In the SW85s, Billy Askew and Ryan Waggot were closely matched throughout, taking a win apiece and finishing within two points of each other. But, there was a superfast rider in the form of Lucy Barker in their midst, taking no prisoners, she improved her results race by race until laying claim to a well-deserved class win in the final 85cc race of the day. The youngest category, the 65s, who were the first group to get out on the Dunbar track, witnessed intense battles between Haden Stat, Liam Bell and Jamie Prentice with Jaxon Haswell joining them in the third leg. Young Evie Wilkie, in her first-ever deep sand motocross, failed to score due to forgetting to get a transponder. However, she did complete the three races – it was tough, but she did it!

On the quad front, sand-expert Oli Sansom made his long trip from the West Mildands worthwhile by taking all three class wins, setting the fastest lap in each race in the process. He had a challenge on his hands though, with twenty-year-old Murray Graham taking three holeshots and defending well each race to finish second overall on the day, clinching the SACU and QRS Championship titles for the fifth time. Graham took three second place finishes, with third overall Michael Brewis taking a third, sixth and third, whilst fourth-placed Mark Wilson posted fifth, third and fourth. Ayrton Knowles was fifth on the day and 15-yer-old Robbie Wood rounded out the top six.

The weekend’s event was also the deciding round of the SACU and QRS Adult Support Championships. The title went to James Nisbet who has raced hard with Peter MacGregor all season. There was disappointment for sixteen-year-old JJ Readman who went into the final round of the Adult Support class only three points behind Davie Nixon. Gearbox failure saw Readman DNF moto one and retire for the day, while Nixon finished ahead of Nisbet and MacGregor on the day and third overall in the Championship. Richie Cornett was crowned Scottish Over-40s Champion, having dominated the class completely, winning all 18 motos across the season.

The next round of the Rock Oil Michelin Ecosse Winter MX Series is on Sunday the 12th of January 2020.