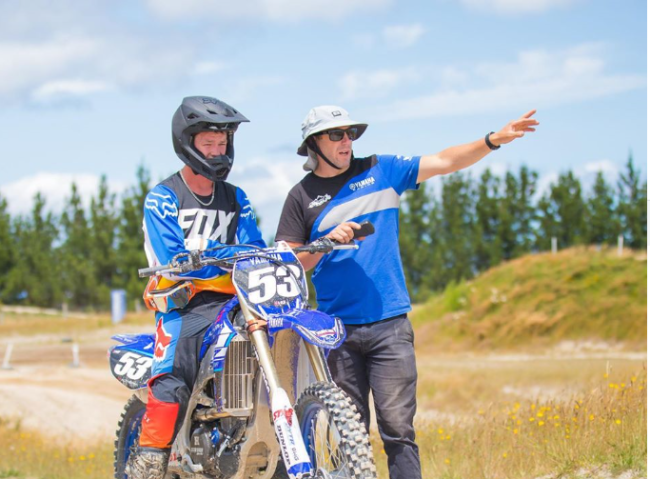 Former international star Ben Townley will run Walsh in the four-round series through his Ben Townley Tours (BTT) business, with support from his equally-successful compatriot Josh Coppins, via his Altherm JCR Yamaha team.

After his stand-out performance winning the 2019 British MX2 Championship, the collective New Zealand motocross community hoped Walsh would continue on the world stage flying the nation’s flag.
Tauranga’s Townley has been following Walsh’s international career and was “gutted for him that he didn’t get an opportunity to continue in the 2020 MX2 World Championship,” he says.

“When Josh asked if I’d help him out, I jumped at it to be honest. I really believe that I can help Dylan tick a few boxes and get his entire package as a racer ready, so he can tackle an international racing programme again, as soon as next year. I’m really looking forward to the challenge!” Townley adds.

Yamaha Motor New Zealand’s Motorsport Manager Coppins says: “I rate Dylan as a top 10 rider in MXGP for 2020 but when it finally became clear that an international ride wasn’t going to eventuate for him this season, unfortunately our Altherm JCR Yamaha team structure was complete. So, Ben and I pulled together to make this deal work.”

“Dylan is fortunate to get this help from Ben, who is a world class coach and my Altherm JCR Yamaha team riders are also able to tap into his wealth of knowledge, so it’s a great opportunity all-round,” Coppins adds.
Walsh says: “I am super thankful that Josh and Ben put this programme together for me to race for Yamaha in New Zealand over the summer. I couldn’t have any two better people backing me and I’m just really excited to get it under way.”

“I also really appreciate Ben and his family opening the door of their home for me to come and stay with them while I’m in New Zealand,” he adds.
While this announcement is potentially no huge surprise to the general motocross public – as posts of Walsh working with Townley have been on social media recently – Coppins says there’s been a lot of hard work going on behind the scenes that he wants to acknowledge.

“I’d like to get the point across that there has been a collective of people working to make this happen. Ben and I went around our sponsors and put this deal together and we are grateful to the below backers, who jumped on board to assist,” Coppins says.

“It’s never easy to find sponsorship but as Dylan rode for Altherm JCR Yamaha in 2018, where he finished second in MX2, plus the fact that he’s a likeable rider, it all came together relatively easily. We are proud of how the collaboration between Altherm JCR Yamaha, Yamaha Motor NZ and Australia and BTT’s sponsors can help make things happen for Yamaha riders,” Coppins says.

Walsh will debut in his new team this weekend at the Woodville NZ GP where BTT will provide the race structure for him and he competes as a satellite rider to Altherm JCR Yamaha. He will strengthen Yamaha’s programme as he races alongside Altherm JCR Yamaha’s current MX2 rider Mangakino’s Maximus Purvis. Walsh will then contest the New Zealand Motocross Championship, which begins in Balclutha on February 1.

Having signed a deal with Serco Yamaha in Australia, Walsh will go on to race across the Tasman in both the Australian Motocross and Supercross Championships in MX2, after the New Zealand season.

“Our goal is to definitely win the NZ MX2 championship and learn as much as I can from Ben and Josh, while building as a rider. Plus it’s a perfect preparation for the Australian championships,” Walsh says.
Townley and Coppins are grateful to Serco for supplying parts and accessories for Walsh’s Yamaha YZ250F for his New Zealand season.

Australian Kirk Gibbs will be returning to the Altherm JCR Yamaha team for the second consecutive year and will be looking to repeat his 2018 MX1 win in the 2020 Fox New Zealand Motocross Championship. He joins the team’s Hamilton-based rider Kayne Lamont, who will also race in the top-tier motocross class.