Dylan Walsh on his JM Honda and MXGP debut 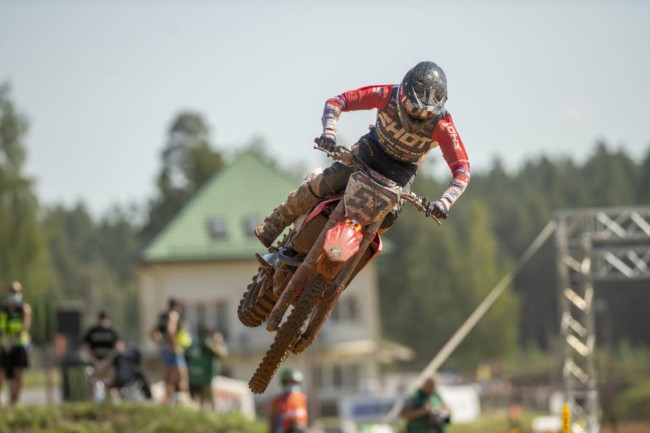 Although the final second Latvian MXGP round definitely had some positive takeaways the results sheet at the end of the day told a very different story. MXGP rookie Dylan Walsh grabbed the limelight with two strong starts in his first outing for JM Honda Racing.

Hot temperatures and a treacherous Zelta Zirgs circuit put the best motocross riders in the world once more to the test. The third consecutive race in Kegums, the fifth GP of the season started off well for Benoit Paturel.

Relieved from the pain in his arms that had plagued him in previous morning sessions the Frenchman was feeling great in free practice. Unfortunately Benoit went down in spectacular fashion during the qualifying session. Due to a freak obstacle on the take-off of a table top jump Paturel went over the bars and landed hard. A medical check and scan, revealed a fracture to the T12 vertebra and a cracked tailbone.

While Dylan Walsh hit the same line on the table top jump that caused Paturel to crash the New-Zealander luckily walked away unscathed after his off-track excursion. Walsh went to the gate 23rd but managed two strong getaways inside the top-10 in the motos. The first moto saw the British MX2 champion cross the line 23rd just outside the points. A small error on a jump prematurely ended his race in moto 2.

Team mate Paturel tried to race but had to withdraw early on in the opening moto. Artem Guryev also suffered an early crash in race one and hurt his back, which hampered his overall results.

Dylan Walsh: “All in all it was not so bad. For sure the learning curve was really big for me this weekend. It was my first time on the JM Honda race bike, and my first time in MXGP too! The intensity of the racing is really something you need get accustomed to. When I was upfront immediately I got a bit carried away and forgot to breathe properly. On top of that I was riding the 450 way too much like a 250. All things we need to work on but I’m sure we will improve from here onwards as I get more time on the bike.”

Jacky Martens, team manager: “Not how we hoped to round off our week in Latvia! Things were looking up in the morning because Benoit rode much more at ease than before. It was tough to see him take a tumble like that. He’ll have further examinations tomorrow in Belgium and we hope he can recover quickly.

Dylan showed a lot of heart and came off the line strong each time. He was sixth at the start of the second moto but obviously he needs more time on the bike and more preparation to really show what he can do in MXGP. Artem was unlucky too. Even from his far outside postion he had an excellent start in the first moto. He was mid-pack when he crashed on the first lap when he collided mid-air with another rider and hurt his back. Although he suffered a huge hematoma on his back he went on to race in the final moto and placed 25th , his best result so far. Days like these are tough for everyone but we stay positive and keep on working.”