Dylan Walsh on Hawkstone Park – It should have been a win 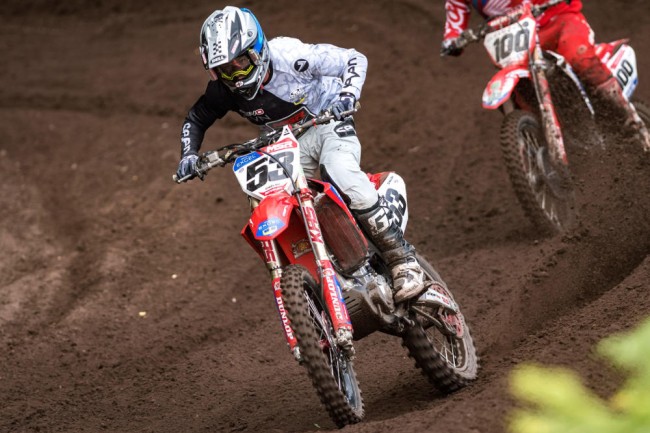 Killer Kiwi Dylan Walsh got his return to the UK off to a rock-solid start at Hawkstone Park on Sunday and could have come away with the overall win in the Pro MX1 division but for a technical issue that dogged him in both motos.

Dylan, who’s better known as a 250cc specialist, was making his big-bike debut for the new MSR Redline Honda team on a stock CRF450R at the opening round of the MX Nationals and he impressed from the get-go with seventh in Qualification against a truly top-class field.

A strong start in the opening 25-minute plus two lap moto saw him hold second for almost the full race distance but he was unable to push as hard as he would have liked after his rear shock started to fade around half-distance. On the final lap he was taken down by another rider but recovered for fourth.

In race two he led until the closing stages when a rapidly fading rear shock again forced him to drop his pace and cost him a place. Then, two corners from home, he lost control of his ill-handling machine, crashed and slipped back to sixth for fifth overall.

Mark Yates (REVO)
“It could have been better but I shouldn’t grumble – it was Dylan’s first 450 race and he would have had the overall if we hadn’t had massive suspension issues with the back shock boiling over in both races.

“In the first race he was in second, got taken out on the last lap and managed to recover for fourth. He was running a stock bike and although we’ve had the suspension done it’s just standard Showa suspension and it couldn’t take the heat – mid-race it was like a pogo stick – so we’re going to have to look at that this week with some of the Showa A kit stuff for the rear.

“In the second moto he nearly got the holeshot but moved into first straight off the bat and held the lead for most of the race but the shock started to go off and Brent Van Doninck passed him. By this point he had no rebound control and the bike just spat him off in the penultimate corner of the last lap and he lost another four places.

“Overall we’re pleased though. It was his first 450 race – he’s only been on the bike for 10 days – and he’s shown that he’s got the speed and can stay at the front and soak up the pressure. We just need to get the suspension sorted out.”

Matt Smith (MSR)
“It’s been a good day. Dylan looked really good and I’m very happy with that considering he’s not a 450 rider and it was only his third time on the bike. I can’t complain at all to be honest – not many riders would have been able to do what he did in such a stacked class.

“The only person missing who does the British championship was Shaun Simpson – all the other top men were there – and Dylan showed that he has great speed on what was a standard bike.

“It should have been a second in the first race and he led the second race for the first 24 minutes. The results don’t show how well he went and I’m confident that with a few more days on the bike and a bit more testing with suspension and other components he will be a title contender.”

Dylan Walsh – 5th overall Pro MX1
“It should have been a win but you’ve got to take it how it comes. The track was super-sketchy but I enjoyed it but as soon as I got to halfway in both races the shock was just too hot and I was fighting the bike way too much – it just got too soft. It cost me the overall but it’s good to be back in England – I do like it here.”