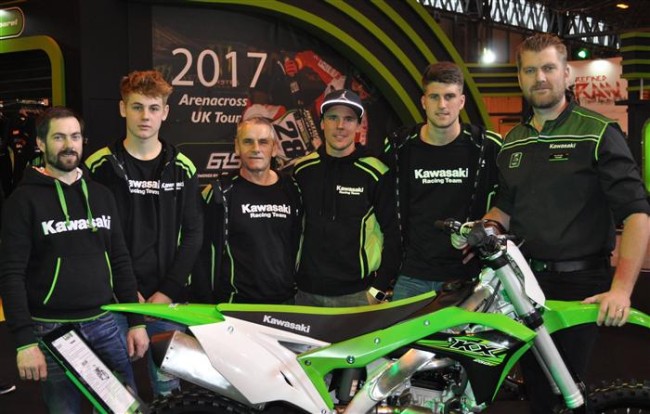 British Championship Motocross team, Dyer and Butler, will switch to Kawasaki machinery for the 2017 season.

The three rider line-up remains unchanged. Steven Lenoir looks to move closer to the 450cc title aboard his KX450F in the MX1 class, with Liam Knight and Taylor Hammal both racing in the MX2 class – and other national events – on the all-new KX250F.

After a successful few years on rival machinery, both the team and race coordinator, Ross Burridge, are excited about the prospect: “I’ve always admired the way the Dyer and Butler team have conducted themselves both on track and in the paddock – and to have them on our KX machines is very exciting. All three riders are more than capable of running at the front of their respective classes and I can’t wait to see what happens when the gate drops at round one in a few month’s time.”

Paul Hobbs, Team Owner, said: “We’re delighted to change brands to Kawasaki. We’re excited for the future and the testing we’ve done of the bikes already has shown them to be very competitive. We’re expecting to continue the success that the team has had over the previous years.”

Steven Lenoir commented: “I am happy to keep racing in the UK and to be with the same team. I’m happy to be switching brand and the bikes look promising. I am super excited to be on a Kawasaki and looking forward to the change. I’ve never ridden on one before, I can’t wait to start on it.”

Taylor Hammal said: “The first few times I’ve been on the bike, I already feel comfortable on it. I’ve only previously rode KTM’s so it will be good to have a change and hopefully we’ll get great results on it from the start of the season.”

Liam Knight said: “I’m really happy with the 2017 KX250, it’s a lot better than I was expecting – I’ve never ridden a Kawasaki before, but after just a couple of laps I was used to it. It’s only standard at the moment, I’m excited at getting the race bike sorted. I hope to have a good year on the Kawasaki.”