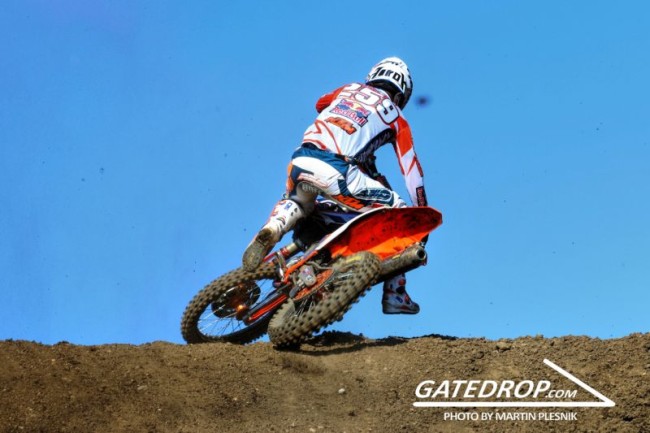 The fourth round of the Dutch Masters Championship was held at Emmen today.

It was a good day for Jago Geerts as he went 1-1 in the moto’s and was able to clinch the overall as well as the championship, congratulations to the Belgian!

Mikkel Haarup had a strong day on his Ice One Husqvarna to end up second overall with Rick Elzinga third overall, a very good result for Rick on his Yamaha. British rider, Tayloe Hammal also had a good day and ended up fourth overall.

No surprises in the MX2 class as Jeffrey Herlings dominated and went 1-1 in the moto’s. Jeffrey also clinched his first title of the year but will be hoping he can stay healthy to clinch the world title to add to the Dutch title.

Max Anstie was strong and ended up second overall ahead of Davy Pootjes who is starting to show good form towards the end of the season. Brian Bogers who had his first MX2 podium in Mantova was fourth overall today just ahead of Jorge Prado who was very strong in the first moto.

In the MX1 class Bobryshev and Coldenhoff were too good for the opposition.  They had a good battle in the first moto and Bobby won by just 0.4 seconds at the chequered flag, that’s close!

Coldenhoff got his revenge in the second moto by beating the Russian, however, Bobby was able to clinch the Dutch title. Ceriel Klein Kromhof rode strong and ended up third overall on the day.

Congratulations to Jago Geerts, Jeffrey Herlings and Evgeny Bobryshev for winning their titles!