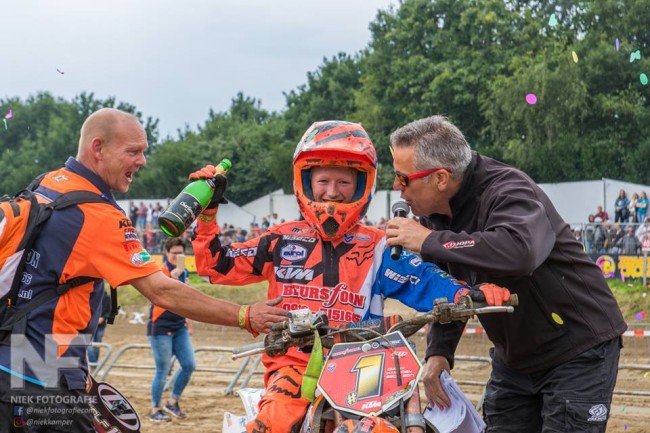 The Dutch Champions have been decided during the last Dutch Masters of Motocross that took place during the weekend at the famous Zwarte Cross event.

During the season it’s mostly been a battle between the two talented Kay’s that Holland are lucky to have coming up through the ranks. Kay Karssemakers and Kay De Wolf have been battling most the season but after winning the first moto during the final round, that was good enough for Kay De Wolf to win the title.

The Beursfoon KTM outfit had Karssemakers in their team last year but swapped him for De Wolf this season and it now looks like a great move as he won the title. De Wolf now heads to Loket where he will be hoping for better things, the European 85cc title! Karssemakers will also be a contender there too.

The Danish youngster has been in super form during the course of the Dutch Masters series. In fact he’s been unbeatable, during the eight moto’s, Haarup won all eight! That takes some doing considering the talent he’s up against. Raivo Dankers and Kevin Horgmo are certainly no slouches.

Haarup loves the sand and he certainly seems to prefer it over the hard pack conditions. With an EMX125 round soon coming up at Lommel don’t be surprised to see him picking up fifth championship points there as he will want to win the EMX125 series now to go with his Dutch title. The World Championship is just around the corner too, the clean sweep could be possible!

Only six points separated them coming into the final round. With both of them being strong in the sand, Bogers really needed to win both of the moto’s to snatch the title away from Olsen.

Olsen took the win in moto win which meant he had a nine point advantage over Bogers heading into moto two. Bogers struck back in moto two to take the win in that one but ‘TKO’ came home in second to win the title by six points. The Dane has really stepped up his riding this year but is used to winning after clinching the EMX250 title in 2016. He now has a Dutch title to add to that. Will he be able to add a World Championship title in the future? Time will tell.

Perhaps the least surprising champ of the weekend was Jeffrey Herlings securing the MX1 title. Herlings has three MX2 World Championship titles to his names but now has an MX1 title to his name. It might not be the MXGP World title that he desperately wants to win but after a very tough start to the season at least he was able to win his national title!