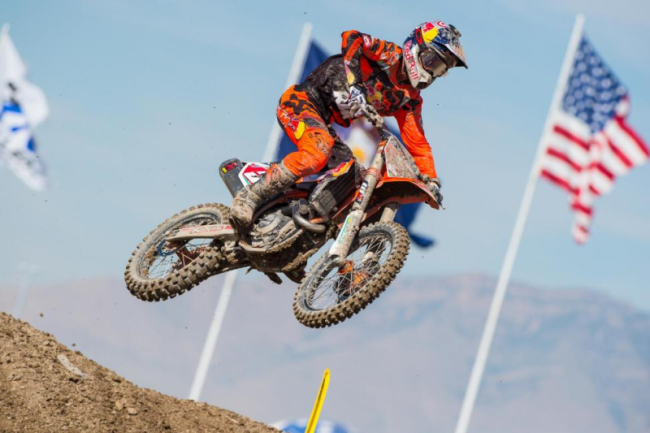 The 2015 Lucas Oil Pro Motocross Championship hosted its penultimate round of the season on Saturday afternoon, with its third visit to Miller Motorsports Park for the Zions Bank Utah National. For the third straight year a champion was crowned at the facility as Red Bull KTM’s Ryan Dungey capped off a truly memorable season of competition by clinching his third 450 Class title in six seasons, hoisting the Edison Dye Cup with one round remaining. It was another undefeated day for Dungey, who raced to his sixth overall win of the season with a 1-1 effort and his first career victory at Miller Motorsports Park.

In the 250 Class, the highly competitive battle for the Gary Jones Cup once again produced a captivating afternoon of racing as Yamalube/Star Racing Yamaha’s Jeremy Martin, the defending champion and points leader, and Red Bull KTM’s Marvin Musquin traded moto wins to tie for the overall victory. Thanks to his triumphant effort in the afternoon’s final moto, Martin earned the tiebreaker to claim his fifth win of the season and maintain a slim two-point lead in championship standings.

With the title within reach, Dungey began his championship-clinching afternoon by posting the quickest lap of timed practice as the Bud Light Fastest Qualifier. When the first moto got underway, it was Autotrader.com/Toyota/Yamaha’s Justin Barcia who raced to his 11th Motosport.com Holeshot Award of the season ahead of Dungey and RCH Soaring Eagle/Jimmy Johns/Suzuki Factory Racing’s Ken Roczen, the defending champion. Barcia held onto the lead briefly, but Roczen soon asserted himself out front and moved out to a comfortable margin over the field.

Dungey battled Barcia for second for several laps before finally getting the upper hand on Lap 3. Once into the runner-up spot, Dungey set his sights on Roczen out front. The KTM rider gradually chipped away at his deficit to Roczen and soon was on the rear fender of the Suzuki. Roczen kept his rival at bay for the majority of the moto, but Dungey got the best of Roczen on Lap 13. Once out front Dungey pulled away and crossed the line for the moto win 4.331 seconds ahead of Roczen. Barcia had a solid hold on third for over half of the moto, but then came under fire from RCH Soaring Eagle/Jimmy Johns/Suzuki Factory Racing’s Broc Tickle, who eventually took over the position on Lap 11 and carried it through to the finish.

When the field roared out of the gate in Moto 2, Autotrader.com/Toyota/Yamaha’s Phil Nicoletti was the first out of Turn 1 and grabbed the Motosport.com Holeshot Award ahead of Roczen and Barcia, with Dungey lurking in the top five. Roczen seized the moment again and moved out front on the first lap, with Dungey vaulting into second ahead of Barcia. Much like the first moto, Dungey had to overcome a deficit to Roczen and gradually closed in until he was once again able to mount a challenge. On Lap 12 Dungey pulled the trigger and took the lead, pulling away in the late stages to take the checkered flag by 8.862 seconds over Roczen. Barcia rode to a solid third-place finish.

Dungey’s 1-1 effort gave him back-to-back sweeps, racing to victory in seven of the last eight motos, including five straight. He also claimed the overall win for the fourth consecutive round.

“This is absolutely a dream come true, to be a champion. This is what you work so hard for but more than anything it takes a strong group around you, with the team, family, trainer and everything,” explained Dungey. “This championship feels more special than the others because I feel like we put more into winning it this time around. We had a new bike and I had a new [training] program, and everything worked out to the best it could be. As much as I wanted to clinch the title today, I knew I had two motos ahead of me and didn’t want to get ahead of myself. I came here with every intention of winning both motos, no matter what the scenario was. I could have settled, sure, but I wanted to race to win and make sure I wrapped [the championship] up. “

Roczen’s strong day landed him in the runner-up spot (2-2), while Barcia (5-3) edged out Team Yoshimura Suzuki’s Blake Baggett (4-4) via tiebreaker for third overall.

Dungey brings an insurmountable 93-point lead into the final round, while Barcia and Roczen continue their battle for second in the championship. Currently five points sit between them, with Barcia currently sitting second.

Bringing a slim two-point lead into the afternoon, Martin set the tone in the 250 Class by posting the quickest lap of timed practice to earn the Bud Light Fastest Qualifier. When the gate dropped on the opening moto however, Martin found himself pushed off the inside of the track and was forced to drop to the tail end of the field. To make matters worse for Martin, he was then one of several riders affected by a first-turn crash started by Monster Energy/Pro Circuit/Kawasaki, last week’s winner. The incident also hindered the start for Yamalube/Star Racing Yamaha’s Cooper Webb.

While this unfolded, GEICO Honda’s Jordon Smith raced to the Motosport.com Holeshot Award ahead of Troy Lee Designs/Lucas Oil/Red Bull/KTM’s Jessy Nelson. It wasn’t long before Nelson made the move to take control of the lead and open a gap on the field. Behind him, Musquin was working his way forward from eighth, while the Star Yamaha teammates Webb and Martin worked their way forward from the tail end of the field to cross the line on the first lap in 16th and 24th, respectively.

Nelson paced the field for a few laps but then engaged in battle with GEICO Honda’s RJ Hampshire, with Hampshire eventually taking over the position. As this pair fought for the top spot Musquin was making a run to the front, bringing Webb along with him. Musquin completed his march to the lead on Lap 8 with a pass on Hampshire, while Webb followed him into second. Webb then placed the pressure squarely on Musquin for several laps, but a tip over on Lap 12 ended his hopes of victory and dropped him to third.

Musquin cruised to the moto win by 10.039 seconds over Webb, who rebounded to reclaim second. A crash in the final turn by Hampshire ultimately gave third to a hard-charging Martin, who valiantly fought his way back from a start outside the top 20.

The stage was set for a thrilling final moto and the field was able to complete just one lap before the red flag was waved for a downed rider, signifying a restart. When the gate dropped for the second time Musquin emerged with the Motosport.com Holeshot Award, with GEICO Honda’s Christian Craig and Webb close behind. Martin slotted into eighth.

After missing out a shot at the win in the first moto, Webb put forth a determined charge to pass Musquin on Lap 1 and quickly extend his lead. Musquin kept Webb honest but the attention soon shifted to Martin, who was surging through the field. The championship leader broke into podium position by Lap 2 and was able get close to Musquin just a few laps later. With Martin closing in, Musquin was able to get back to the rear fender of Webb, but couldn’t mount a serious challenge for the lead and was soon engaged in a bar-to-bar battle with Martin.

Martin took advantage of a slight bobble by Musquin to move into second on Lap 8, and shortly after crossing the line to start Lap 9 he made an impressive pass on Webb for the lead. Once out front, he pulled away and took the moto win by 8.338 seconds over Webb in second, with Musquin third.

The equal moto results from Martin (3-1) and Musquin (1-3) left them tied atop the overall standings, but Martin’s second moto win proved to be the tiebreaker. He became the first repeat winner at Miller Motorsports Park.

“My bike was on point today, but things didn’t go how I planned in the first moto off the gate,” said Martin. “But I knew I had to make it up [to the front] and I was able to. [RJ] Hampshire crashing on the last lap definitely helped [me finish third]. In the second moto I got to the front initially, but then we had the red flag. My restart didn’t go as planned but I just knew I had to catch that KTM [of Marvin Musquin], and we were able to get all the way up there and grab the win. It’s definitely coming down to the wire [for the championship].”

Webb rounded out the podium in third overall (2-2). In the championship standings, the two points that separated Martin and Musquin coming into Saturday remain heading into the final round next weekend.

“This isn’t a track I do very well on, but it’s special to me to come out here and run well,” said Musquin. “I was battling hard with Cooper [Webb] in the first moto but he fell and that made it easy on me. I got a much better start on the restart for the second moto, but Cooper and Jeremy [Martin] were just a little better than me. I’m happy to leave here still with a good shot at the championship and I’m excited for next weekend. No matter what, it will be a special day.”

The Lucas Oil Pro Motocross Championship comes to an exciting conclusion next weekend with its 12th and final round of the 2015 season. Ironman Raceway in Crawfordsville, Indiana, will be the host site of the Bud Light Ironman National next Saturday, August 22.