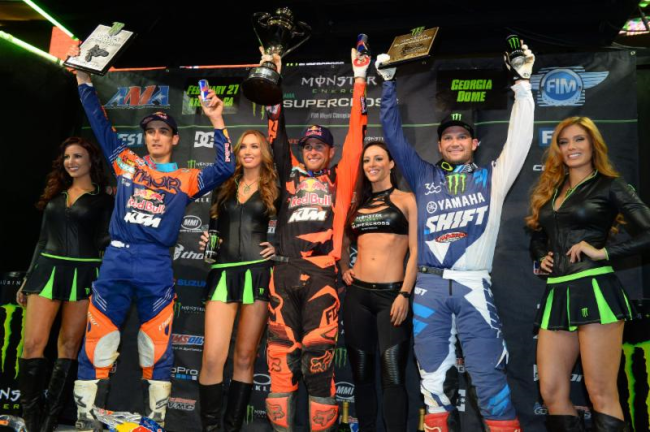 ELLENTON, Fla. (April 26, 2016) – With a three-race winning streak in tow, Red Bull KTM’s Ryan Dungey entered last weekend’s anticipated return of Monster Energy AMA Supercross, an FIM World Championship, to New England with hopes of clinching his third 450SX Class title. However, following an impressive winning effort by RCH Soaring Eagle/Jimmy John’s/Suzuki Factory Racing’s Ken Roczen, Dungey’s celebration was put on hold for another week. This Saturday, April 30, Dungey will look to clinch back-to-back championships for the first time in his career in the shadow of the iconic New York skyline as Monster Energy Supercross makes its annual visit to MetLife Stadium in East Rutherford, New Jersey for the 16th stop of the 17-race season. In the Eastern Regional 250SX Class Championship, GEICO Honda’s Malcolm Stewart brings a five-point lead into the penultimate race of 2016, continuing his chase of a first career title.

Some facts and insights to watch heading into this Saturday’s race include:

•Ken Roczen’s eighth career 450SX Class win not only signified a career-best mark of four wins in a season, but also tied him for 20th on the all-time wins list with Ron Lechien and Jimmy Ellis.

•Ryan Dungey posted his 31st straight podium finish. In doing so, he tied Ricky Carmichael for third on the all-time career podium list with 87. He also equaled Carmichael’s all-time record podium percentage of 75.66% and shares Carmichael’s career starts at 115.

•A podium finish in East Rutherford would make Dungey the most statistically consistent rider in Monster Energy Supercross history, giving him the highest percentage of podium results, top-five finishes and top-10 finishes all time.

•Dungey needs to finish 14th or better at MetLife Stadium in order to clinch his third career 450SX Class title. He has just two finishes outside the top 10 in his entire 450SX Class career.

•Eli Tomac’s runner-up finish was his best result since winning in Daytona Beach, Florida, for the ninth race of the season. It is also his first podium finish since he won, giving him three podiums this season.

•Trey Canard has earned four straight top-five finishes, finishing fifth in three of the last four races, and will be in search of his first podium effort of the season in East Rutherford.

•Martin Davalos’ fourth career win came in his 76th 250SX Class start. He is just one start from tying Kyle Cunningham for the most all time. Cunningham has never won a 250SX Class race.

•Davalos became the second repeat winner in the Eastern Regional 250SX Class Championship, following up Jeremy Martin’s second win of the season one week prior.

Last Saturday at Monster Energy Supercross’ debut from Gillette Stadium in Foxborough, Massachusetts, Dungey entered the afternoon with an opportunity to clinch a second straight 450SX Class title with a win, or by gaining two points over Roczen. After grabbing the SupercrossLive.com Holeshot Award Dungey as in a position to control his own destiny, but a hard-charging Roczen slotted behind Dungey and seized the opportunity to make a pass for the lead before the completion of the opening lap. Dungey attempted to fight back and stayed close to Roczen’s rear fender, but Dungey was then forced to deal with a determined Eli Tomac, who soon put his Monster Energy Kawasaki into second and dropped Dungey to third.

Tomac pressured Roczen for a few laps but was unable to mount enough of a challenge to attempt a pass and as the lead duo approached lappers, Roczen was able to start opening a gap. Meanwhile, Dungey fell into the clutches of Rockstar Energy Husqvarna Factory Racing’s Jason Anderson in fourth, eventually giving up the position and dropping off the podium, which put his all-time record streak in jeopardy. However, the championship leader hounded Anderson and reclaimed the position after the Husqvarna rider made a small mistake in the whoops.

Roczen went on to lead all 20 laps of the Main Event and secure a career-high fourth win this year. Tomac followed in second for his first podium finish since winning in Daytona Beach, Florida, at the ninth race of the season.

“[The race was] awesome. I loved this place [Gillette Stadium] from my first step on the property,” said Roczen. “The track was really tricky and tough in some spots. We put our head down and got the victory. [The team] has put in a lot of work during the week and it’s finally paying off.”

Dungey missed out on clinching the title with a third-place finish, but posted his 31st straight podium effort.

“I got up front early but couldn’t hold the gap. I just struggled a little bit,” said Dungey. “I just kept my head up and kept charging. We’ll move ahead to next weekend and look to take care of business there. Nothing we can do but keep it rolling.

Roczen’s win, combined with Tomac’s podium result broke a three-race sequence in which Dungey, Roczen and Anderson finished 1-2-3. Anderson’s fourth-place finish ended a four-race podium streak dating back to his second win of the season in Detroit.

With 43 points between he and Roczen, Dungey needs to gain just seven points at MetLife Stadium in order to clinch the championship. That would be a finish of 14th or better for the KTM rider, who last failed to record a top-10 finish 44 races ago in Anaheim on February 1, 2014. That night Dungey recorded one of just two DNFs in his career, both of which serve as his only two finishes outside the top 10 in 115 career starts. That’s the highest percentage of top-10 finishes in history.

After opening to five races with five different winners, the Eastern Regional 250SX Class has welcomed repeat winners each of the past two races. In Foxborough, one of the most competitive Main Events of the 2016 season saw Rockstar Energy Husqvarna Factory Racing’s Martin Davalos earn his second win of the year.

The race opened to Dakota Alix becoming the seventh different SupercrossLive.com Holeshot Award winner in seven races, but he quickly lost the lead to Troy Lee Designs/Red Bull/KTM’s Shane McElrath. Before the completion of the opening lap championship leader Stewart positioned himself at the front of the field and opened a gap over the field. After starting fourth Davalos fought his way into second on Lap 7 and set his sights on Stewart out front, ultimately making the pass at the completion of Lap 8. A four-rider battle for the podium saw Yamalube/Star Racing Yamaha’s Jeremy Martin also get into the mix, eventually making his way past Stewart into second on Lap 9. Davalos received some pressure from Martin in the closing laps but lappers soon helped separate the two and the Ecuador native went on to record the fourth win of his career. Martin followed up a win the week prior with a second-place finish.

“It’s been a couple weeks since I’ve been able to ride like this,” said Davalos. “Jeremy [Martin] was riding really good and Malcolm [Stewart] was leading there early on. I just had to focus on my laps. I knew the track would be rutted [after the rain in the morning], but it turned out to be a great day and I’m just really pumped.”

Stewart rounded out the podium in third and was able to extend his lead in the Eastern Regional standings from one point to five points over Yamalube/Star Racing Yamaha’s Aaron Plessinger, who finished fifth.

“I’m just happy to be up here [on the podium],” expressed Stewart. “Overall, the race didn’t go as planned, but it was better than last week [when I crashed three times]. We’ll keep plugging away and moving forward.”

Last season in East Rutherford Team Honda HRC’s Cole Seely, Tomac and Dungey battled for victory in the 450SX Class, with Tomac eventually emerging victorious. In the 250SX Class, Red Bull KTM rider Marvin Musquin clinched his first championship on U.S. soil. He now competes in the 450SX Class, meaning there will be a new 250SX Class winner at MetLife Stadium in 2016.