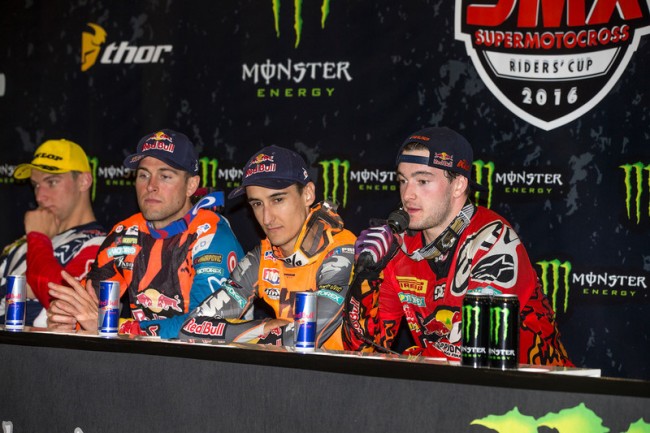 Held in the stadium of Germany’s FC Schalke, the new competition, a faceoff between teams representing six manufacturers, was not a classic Supercross but instead an indoor Motocross race. In addition to three designated riders, each team had the option of a joker rider, who could be deployed at the discretion of the team manager. Team KTM’s nominated joker rider was young Spanish teenager Jorde Prado.

The competition was made up of three races and the result was calculated according to the best seven of the nine results for each team, using the same scoring system as the Motocross of Nations. The team with the lowest score was the winner. KTM picked up only 18 points after discarding their two worse scores, a fifth and a sixth. Honda was second with 43 points and Kawasaki was third with 61 points. The purpose-built track in the stadium was tight and challenging with patches of soft sand and potential traps for riders who were not completely on their guard.

Race 1
Race one saw Ryan Dungey get away well and ride a close race behind Tim Gajser, while both Marvin Musquin and Jeffrey Herlings got tangled in a rider melee at the start. Herlings and Musquin moved up to 5-6 by the end of the race but these turned out to be their worst scores of the night and were wiped from the final result.

Race 2
The second race saw Musquin in the ascendency, finishing second, with Dungey close behind in third. Herlings had a tip over at the beginning of the race but again charged his way through the pack to finish fifth at the flag drop.

Race 3
All three KTM riders got away well in the final race on their KTM 450 SX-F bikes and Dungey looked increasingly comfortable as the race unfolded. But by now Herlings had the measure of the track and half way through the race he put in a sequence of fastest lap times, all the time cutting the gap to his teammate out front. Herlings made the pass on Dungey with three laps to go and went on to win the race. Dungey finished second and Musquin was third to round off a near perfect night’s racing for the KTM team.

Dungey, who returned to racing after a four-month injury break said it was great to come back to competition with a win. “It was kind of nice because the pressure to do it individually was not there but you also wanted to win for the manufacturer. It was great to be alongside Marvin and Herlings and Prado and good to see the KTM team from Europe here. I’m glad that we could get the Manufacturer’s Cup and go 1-2-3 in the individual. A lot of people looked at the track and said I would have an advantage because it was a supercross track, but it wasn’t. It got a lot rougher than you would want for supercross. We got the bike working well and the boys did a great job. They rode well and were consistent and if there was a mistake, they charged back. I thought we worked well as a team.”

Herlings said it had been an honor to be chosen to represent KTM at the event. “KTM had a lot of options and I was surprised that they picked me but I think I showed what I am capable of. I’m very happy to have been second in the individual and its great to win as a team. It was a good experience to ride with Dungey and to pass him in the last moto, well that was pretty cool!”

Musquin: “When Roger (De Coster – Team Manager for this event) called me a month or two ago and asked me to be part of the KTM team I thought wow! I was a bit surprised because we have a lot of good riders at KTM. I was very excited because first I wanted to fight really hard for KTM and to give the best, and also do well myself. For us to be first, second and third on the podium and for me to be third with equal points with Jeffrey was great. It was a good experience and a difficult track because it was like racing outdoors. It’s always fun to do a team race like this.”

Prado was also thrilled to have been named as the fourth rider and to be part of the team with his racing idols: “I didn’t expect to be picked to be the joker rider because KTM has so many good riders, and also when I came here I only expected to make the practice. So today when they told me I could do the three races – that was really fun and really good experience for the future. I was able to compare myself to the best riders on the plant.”

Pit Beirer, KTM Motorsports Director, speaking to the team after the races said: “We could clearly show again in the ranking where the manufacturer from Austria should be – on the top, thanks to this fantastic team. It is so nice to see the one strong force that we can make out of our riders from the US and Europe. Its an incredible pleasure to have you guys altogether.”