Dungey and Musquin podium at Daytona 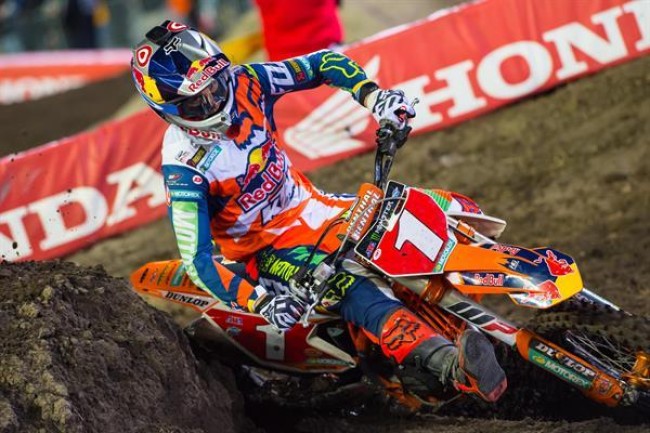 Ryan Dungey and Marvin Musquin qualified third and fourth place respectively on a uniquely tough Daytona Supercross track. Musquin lined up in 450SX Heat 1, where he got off to a great start aboard his KTM 450 SX-F FACTORY EDITION. Musquin quickly made a pass on fellow Frenchmen Christophe Pourcel to take over the lead, where he went on to capture the heat race win.

In 450SX Heat 2, Dungey grabbed a third place start and quickly moved into the second place position. However, Dungey wasn’t able to make the move on Tomac for the lead, ultimately finishing second in his heat.

Main Event
In the 450SX Main Event, both Red Bull KTM factory riders got off to a great start but it was Dungey who claimed the official holeshot. With Musquin and Dungey close in tow, Eli Tomac commanded the lead on the opening lap.

Dungey maintained a close second place position throughout the 20-lap Main Event but wasn’t able to make a pass on the leader. In the end, Dungey finished only two seconds back to claim his ninth consecutive podium finish with second overall. The defending 450SX Champion gained valuable points in the championship chase, where he will maintain the lead heading into round ten.

“Daytona is always a nasty one,” commented Dungey. “But it’s good to be on the podium and pick up some valuable points in the overall championship.”

Musquin settled into third behind his teammate Dungey, where he kept a solid pace throughout the Main Event. Musquin’s great performance earned him a third-career 450SX podium finish and a boost into seventh place in his rookie championship season.

“To be second and third tonight it a good result for the team,” Musquin said. “To be third tonight is big for me and I’m happy to be up on the podium again.”

Troy Lee Designs Red Bull KTM’s Justin Hill stands on podium for first time this season
Justin Hill showcased his speed last weekend when he went from 21st to fifth and this week the results spoke for themselves as Hill earned the runner-up spot at Daytona International Speedway.

Hill started the day with an awesome qualifying lap on his KTM 250 SX-F FACTORY EDITION that put him on top of the time sheets. He carried that momentum into the evening’s racing, and started the Main Event just outside the top five. He put on a great charge over the long race, eventually making a late pass for second and claiming his best finish of the season. His second place finish puts him only seven points out of the championship lead.

“I felt really good all day, and think I could have had a chance for the win if I would have grabbed a better start,” said Hill. “It’s really awesome to feel this good and be right there in the championship battle.”

Shane McElrath continued his fight back into form, but showed amazing heart during the Main Event. McElrath started outside the top 15, but picked off riders and eventually broke into the top 10. Despite still getting back to form after suffering an off-season injury, McElrath maintained his speed and finished the night 10th.

“Coming back from injury isn’t easy, but I’m trying to improve each week and I think that I’m growing and learning each race,” said McElrath. “We’ll take it race by race and hopefully I’ll see my results improve with each passing round.”

Alex Frye’s night didn’t go according to plan, finishing 22nd following an opening lap crash. He’ll look to get back up front next weekend during the third round as the series heads north of the border to the Rogers Centre in Toronto, Canada.