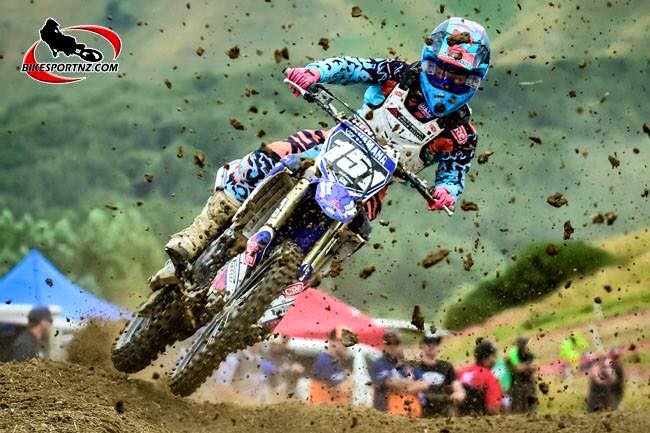 Altherm Yamaha Official WMX’s Courtney Duncan came out on top at Loket in the Czech Republic – round four of the FIM Women’s Motocross World Championship – after a thrilling race where she passed MX Fonta Yamaha Official WMX’s Kiara Fontanesi on the final corner for the win, while NoFear Yamaha Official WMX’s Nancy Van de Ven made it a total Yamaha domination chasing the duo home for third. Overnight rain made for a slick and challenging final moto where Duncan, Fontanesi and Van de Ven all faced adversity. Duncan salvaged second place and won the Grand Prix while Van de Ven laid it all on the line for third and third overall, 3-points clear of Fontanesi who was fourth.

A hard-pack track always becomes a challenging battle for grip especially when there are hills involved like the steep climbs and daunting decents in Loket. With that said, traction wasn’t the only hurdle this weekend as the track was relatively smooth and lap-times were tighter than ever. In the Timed Practice session yesterday less than half of a second separated the top three. FontaMX Yamaha Official WMX’s Kiara Fontanesi set the pace and went pole ahead of fellow Yamaha starlets No Fear Yamaha Official WMX’s Nancy Van de Ven and Altherm Yamaha Official WMX’s Courtney Duncan.

All three girls were looking sharp on-board their fierce YZ250F machines in Race 1. Kiara Fontanesi emerged from turn one in fifth place ahead on Van de Ven while Duncan was buried in the pack well outside of the top-ten. Fontanesi, who is looking fitter and faster than ever right now, put in a hard charge right off the bat and had passed a bunch of high calibre WMX riders, including the defending champion Livia Lancelot, to move into second place before the end of lap two. Meanwhile, Lancelot proved a tough nut to crack for Van de Ven, but the Dutch lady never gave up and seven laps in, she finally got the job done.

It may seem out of character for Duncan to bide her time as a rider that is renowned for her energetic and eager riding style, but the ‘Kiwi Girl’ is under the wing of former Yamaha ace Josh Coppins, and he has been working on her race craft. Her patience paid dividends this time round as she took her time at the start of the race before dropping the hammer with four minutes to go. A nice pass of Van de Ven with three laps to go threw Fontanesi in the pressure cooker as the Kiwi started chipping away at the Italian’s lead.

It was a nail-biting final 3-Laps for everyone dressed in paddock blue with all three Official Yamaha WMX riders inside the top three. Duncan set the fastest lap of the race with two laps to go and managed to pass Fontanesi on the final corner to take an emphatic race win. Fontanesi later learned she had a hole in her header pipe, which meant she was down on power, and did a fantastic job of nursing her bike home for second place ahead of Van de Ven.

After an incredible day yesterday with all three Yamaha starlets finishing inside the top-three, the seas weren’t as smooth today. Overnight rain made for an extremely slick clay surface which caught out all three riders at certain points of the race. Duncan got off to a decent start, but lost traction while trying to make a pass for the lead on lap four and crashed. The ‘Kiwi Girl’ made a quick remount and managed to hold onto second place all the way to the flag, which was enough for her to win the WMX Grand Prix of Czech Republic, and also inherit the championship lead.

Fontanesi got off to a terrible start but didn’t waste any time laying the power of her YZ250F down as she charged her way up into fourth. While tussling with the defending champ, Lancelot, once again, her patience wore thin and she attempted to force a pass. Lancelot didn’t back out of the challenge and the two class-A riders ended up in a heap on the ground. Both were quick to remount with Lancelot getting away slightly quicker than Fontanesi, but too much time was lost. Fontanesi had to settle for sixth, and fourth overall while Van de Ven was lightening quick and managed to salvage third place after starting outside the top-twenty. She finished third overall.

“It’s been a really good weekend. I did what I needed to do. I won yesterday and was second today which gave me the overall win and I took the championship lead back.”

“My weekend was ok, not the best results, but at least I had a good feeling on the bike and my speed was ok. The end result didn’t really fall in my favour, but I was third overall, and that is ok.”

“I am happy with my speed and the pace I was running because I know that when I give everything, I am the fastest on the track. Yesterday I was riding good but I had a problem with the exhaust and lost a lot of power so Courtney had the chance to catch me and pass me so I finished second. In the race today, the track was muddy and it was hard to pass because there weren’t so many lines. I crashed with Livia, and then the race was over for me because of the time lost. Now I am going to rest and re-focus. I am now second by 3-points in the championship, which is nothing. It is only important to be leading the championship at the end, so I know I am not in a bad situation.”