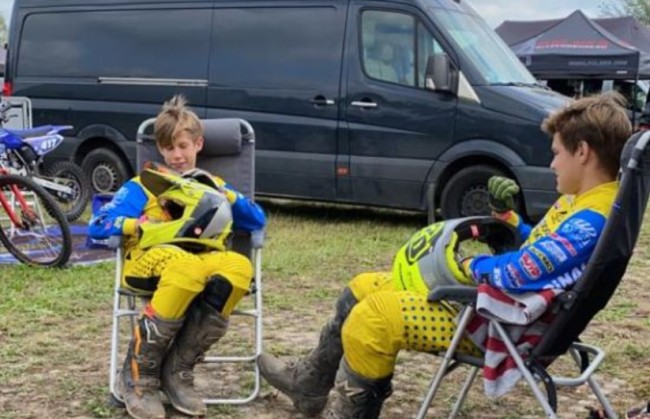 Let it not be said that the Du Toit Brothers, or Toit Boys in popular parlance, are slow learners. Most people with the slightest inkling of international race knowledge will know that it is no easy ask to descend upon the Netherlands and take on the locals on own terrain in motocross racing. The Dutch tracks, with their deep sands, are giant slayers, and many a rider has come to realize just how tough it is to make your mark in this particular arena.

Brothers Leonard – and Barend du Toit took up the challenge, and during the enforced layoff from racing whilst the coronavirus pandemic raged wild, they stuck to their task, learning the tracks, getting fit, picking up skills. The first round of the Open Dutch Championships yielded mixed fortunes for them, with Barend breaking the ice with a top ten result, and Leonard being taken out of contention before he had even rounded the first corner.

A week later, the brothers participated in a well-attended event at Nederweert, and this time Leonard came out swinging by winning his class, Barend was again a picture of solidity, with another strong result in the 85cc class. For the third round of the Open Dutch Championships, the GPRMX team upped and headed for Halle, a track much beloved by many riders, but a substantial challenge nonetheless.

Barend has by now shaken off the initial nerves, although each track is still new to him, since this is his first visit to the country. He got used to the track layout, and posted the seventh fastest time during qualifying. Things did not go all that smoothly for the plucky young South African in the first race, though. A crash in the first lap dropped him to 32nd position, and he had he had his work cut out. He made progress like an irritated rocket, and by the fourth lap, he was already in 19th position. Now among faster riders, he had to work all the harder to make up positions, but he claimed four more places in the last three laps to finish 15th.

The second race provided, if there were any doubt at all, a perfect illustration of Barend’s international credentials. He found himself in 12th position off the start, and again his progression through the field drew a near vertical graph. By the third lap he was sixth, and now in among the real heavyweights of the class. He kept pushing, and was rewarded with fourth position at the flag. Significantly, his fastest lap time put him very much in the vicinity of the top contenders in the class, proof positive that he had closed a huge speed gap to the home riders in a very short space of time. Barend was eighth overall for the day, and is ninth in the championship standings, even though he had missed a round.

Leonard had a point to prove in the Open Dutch Championships, having be sideswiped out of contention on the start straight of the very first round. He steered his 125cc Husqvarna around with aplomb, and qualified in 11th spot, 1/10th of a second from a top ten gate pick. Like brother Barend, his gave himself a lot of work to do in the first race, holding 21st position initially. By the seventh lap he had advanced into the top ten, but still his energies had not been spent. He worked his way to sixth position, only to lose a spot on the final lap, and came home seventh after a strong ride.

With the top ten ice having been broken, Leonard was more confident going to the line in race two. He started off in tenth position, but the bump and barge of lap one dropped him to 19th, effectively wiping out hopes for a top five finish. He gathered himself up and charged forward, fighting to make the best of the cards that he had been dealt. He held ninth position for a couple of laps, but again yielded a spot on the last lap to finish tenth.

Leonard was seventh overall for the day, an excellent achievement for a rider essentially on his debut in the class. Having missed two rounds of the series for all practical purposes, he is 30th in the championship standings.

The brothers have been away from home shores in South Africa going on eight months now, and the travel restrictions mean that they have not had any opportunity to meet up with family or home friends. They will be on a plane and homeward bound in a few weeks’ time, and will miss the last rounds of the championship series. One thing is clear, though – they have proven that speed – and ability wise, they very much belong in among the international riders.