Double wins for Irwin and Barr at Culham! 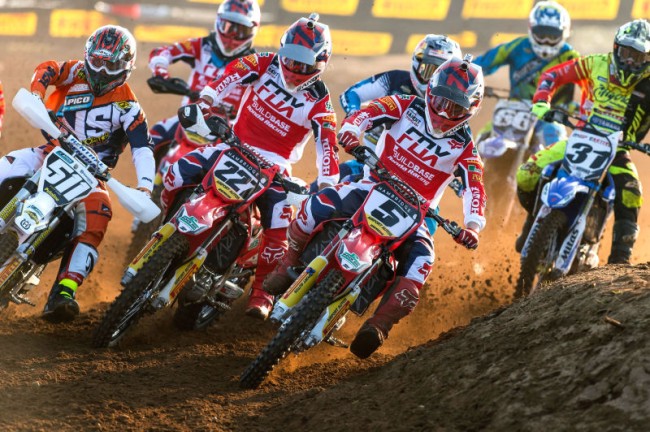 Fresh off the back of a dominant performance at last weekend’s opening round of the MX Nationals, Buildbase Honda Racing riders were again in control at the first round of the Pirelli British Masters at Culham Park on Sunday.

On the uncompromising hillside track on the banks of the River Thames, the team’s four riders ran 1-2 in both MX1 and MX2 classes to set themselves up perfectly for the opening round of the Maxxis ACU British Motocross Championship in a week’s time.

Racing a pair of 2016 CRF450Rs, Graeme Irwin went 1-1 ahead of team-mate Kristian Whatley’s 2-2 in MX1 while Martin Barr was head and shoulders above the MX2 class in the two mixed-capacity races. Lewis Trickett continued to build with his 4-3 results earning him the second step of the MX2 podium on his CRF250F.

Graeme and Kristian were first and second in MX1 qualification with Graeme taking the holeshot in race one. Kristian started third and quickly moved to the front but Graeme repassed his team-mate and maintained a small gap to the finish.

Lewis started strongly before Martin went through and closed down a 15-second gap to the MX2 class leader, making the pass stick for the win.

In race two Graeme claimed his second holeshot and was never headed but Kristian had to show his pace, coming back from mid-pack following a fall to second in MX1. Martin bossed the MX2 class from the drop of the gate while this time Lewis was forced to make a string of strong passes to ensure second overall.

“A perfect day,” said Graeme. “I qualified first and in the opening race I just rode my own lines and won it without having to push too hard. The second race I holeshot again and after four laps I had something like a 20-second lead so I just cruised round on the pegs.

“It was an easy day to be honest, everything just clicked. The biggest thing was how well the bike got me out of the start in both races in the front so I could stay out of trouble. It made it easy.”

Kristian, who’s had a an extended period off the bike following a pre-season foot injury, was happy with his speed but is still looking for more.

“It could have been better,” he said. “First race I was a little bit tight and Graeme pulled a lead on me halfway through. The last few laps I was trying really hard to get on the back of him and managed to but I couldn’t quite pass him.

“The second one I got an all right start. I was behind Graeme and then I washed the front wheel out in a right-hand turn and probably went back to about 18th but I came back strong and felt I had good lines and a good pace.”

With the opening round of the British championship just one week away, Northern Irish star Martin is showing great form.

Barr won for the second week in a row. Pic: Honda

“I’m real happy, another good weekend,” he said. “I can’t ask for much more. Everything’s working really good, I just want to try and keep this ball rolling. It’s been brilliant preparation leading into the first round of the Maxxis British championship next weekend.

“Another double win today to back up last weekend’s double win. I just feel every part of the bike is working really good. Next weekend’s going to be tough but I’m feeling confident.”

Lewis’ confidence is also building with every good result and he goes into the Maxxis opener at Lyng on a high.

“It’s been a pretty good day today with second overall,” he said. “I qualified fourth in MX2 and 10th out of the mixed race which gave me a good gate and I had solid starts all day.

“I was running second for a while in the first race but got a bit tight and made a big mistake down the bottom and Martin [Barr] passed me and then made another mistake later on and lost third but in the second I didn’t have such a good start but got my head down and pulled through to third.”

“Conditions were everything we want this time of year – really rough, really technical,” he said. “Kristian’s foot injury isn’t affecting his fitness but it’s highlighting his lack of bike time. Graeme is riding so well at the minute but I’m quite surprised that Kristian is so close so early on given his lack of bike time. We’re delighted.

“In the second race Kristian was third but on the first lap he got cross-rutted and went down – he picked himself up in 15th and came through the pack like a hot knife through butter. He rode fantastic.

“Martin’s riding well and the bike’s working well for him. We’ve got a good package going into Lyng. Lewis needs to focus a little better on his first, second and third lap – after that he really gets into the race but he can get swallowed up early on.

“I have to say a big thanks to the mechanics – the 250 guys Willie and Nick and the MX1 guys Rob and Ryan – as they’ve worked so hard to give us the package we’ve got. Also a big shout out to Ryan and Martin Barr Senior for giving us the engines.

“We’re under no illusions that Lyng is a different set of riders but we couldn’t have prepared any better.”