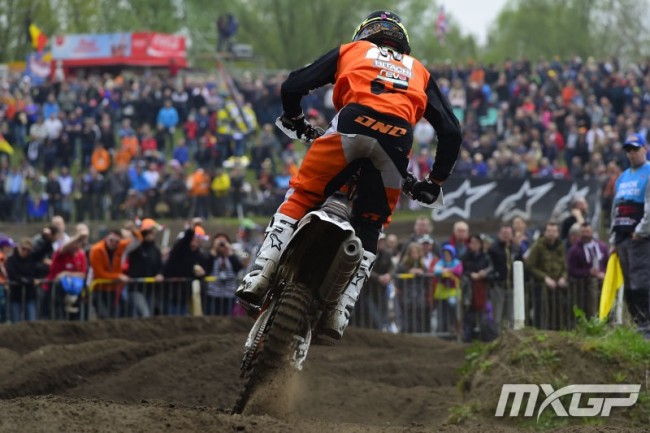 The Wilvo Virus Performance KTM team visited the historic circuit of Hawkstone Park for the second time this year this past weekend, as it played host to the third round of the 2016 Maxxis British Championship. The team topped the podium the last time that they tackled the sandy surface, so hopes were high entering the event.

The MX2 riders kicked off proceedings beneath sunny skies on Sunday morning, as they took to the track for their qualifying session. Adam Sterry ensured that he would have a good gate pick for his motos, as he posted the third fastest time in his class. Shaun Simpson went one better than that in the MX1 session, as his lap time put him second heading into the races.

Adam Sterry made it quite clear that he has improved significantly since the second fixture a month ago, as he took the holeshot and with it the early lead in the first of two MX2 encounters. Sterry gave up the top spot during the hectic first lap, but was quick to regroup and charged onto the back wheel of the leader. Although he attempted to make multiple passes and get inside the head of his opponent, he was eventually forced to settle for second as the door was shut on him repeatedly. Twenty-two points were gained, which could prove to be handy in the title chase as the season progresses.

The first MX1 moto was fairly uneventful at the head of the field, as Shaun Simpson was dominant and reminded everyone why he has the red number one plate bolted on his Wilvo Virus Performance KTM. After taking the holeshot a series of blistering lap times helped him establish a comfortable gap, which he then maintained to the finish with relative ease. Simpson also set the fastest lap time of the race.

Although Adam Sterry did not take the holeshot in the second and final MX2 encounter, he still had a good start and ended lap one comfortably inside of the top three. It took Sterry six laps to move into the runner-up spot, but unfortunately the gap to the leader was too big to overcome at that stage. Another second place left him in the same position overall and ensured he lost no ground in the series standings, so he remains a threat despite missing the opening round with an injury.

Shaun Simpson put on another clinical display when MX1 moto two commenced, as he slotted into the top spot immediately after his second holeshot of the day and never looked back. With the track at its roughest, Simpson excelled and put in a ride that was more dominant than the first. Fourteen and a half seconds was his advantage at the end and his fastest lap time was a second faster than the rest of the field. A clean sweep left him on the top step of the podium again and saw him extend his lead in the championship to ten points with five rounds remaining.

Shaun Simpson: “It was nice to come here knowing I rode good at the international. There was a lot of rain yesterday, but wow did it dry up today. It was really technical, nice and bumpy with a lot of lines. It was just my type of going really. I did what I needed to do with two first places and extended the championship lead out to ten points as well. Keeping the red plate was the goal and that was what we managed to execute.”

Adam Sterry: “I wasn’t really happy with my riding and expect more from myself, but I’m still working to get back to one hundred percent after my injury. I’ve had to race my way into shape, so we’re working hard through the week. Two seconds wasn’t what I wanted and I definitely didn’t ride as well as I could have, but considering how I rode I don’t think that two seconds was too bad.”

Steve Turner: “We had a bloody good day all round, three holeshots out of four, two race wins and two seconds ain’t bad going. Shaun was pretty dominant and the two wins will give him increased confidence going into the next phase of the season. To be honest, I felt Adam could have also taken the overall if he had been a more aggressive in the first race when he was clearly the fastest. His second race was nowhere near as good as the first, he never really looked comfortable and was riding well below 100%.  It’s pretty impressive though to be able to take two second places when you’re not back to full race pace and not riding with complete confidence.