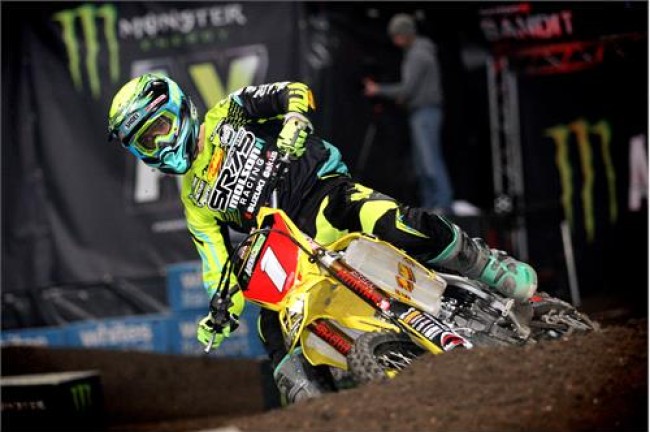 Thomas Ramette, the 2015 and 2016 Arenacross Pro champion, has confirmed he, and SR75 World Team Suzuki, will return to AX in 2017 with a single-minded determination to once again lift the coveted AX Pro crown.

Whilst undoubtedly the most successful Pro racer, and team, in the four-year history of the ultra-competitive race series, Ramette and SR75 will be up against some stiff opposition next year. Both preceding Arenacross champs Adam Chatfield and Fabien Izoird are already signed up and chomping at the bit to get out on track to secure points, and a share of the significant prize fund. However, Ramette may have a slight advantage in that he is the only former series winner to return with the same manufacturer, team-mate and team setup.

Ramette’s smooth style and determined attitude served him well in the closely-contested, and often controversial, 2016 series, particularly as it reached the climax in London. He set out his stall at the opening round, at Manchester back in January, with an Arenacross racing masterclass to secure the first win of the year, and then went on to take a further four Main Event outright wins. Of the eleven-round championship, the Suzuki pairing of Ramette and team-mate Cyrille Coulon enjoyed ten podium finishes, confirming SR75 Suzuki as undisputed back-to-back Team Champions in the process.

Never one to rest on his laurels, Ramette kept himself pretty busy once the AX dust settled. Immediately after the final leg at Wembley, he jetted out to America to tackle the East Coast rounds of the gruelling AMA Supercross, prior to returning to Europe to contest, and win, a number of high-profile indoor and outdoor supercross events. In the latest chapter of the Ramette success story, the likeable 25-year-old Frenchman was crowned King of Stockholm SX at the beginning of October, ahead of fast-charging Arenacross regulars Angelo Pellegrini, Jack Brunell, Izoird, Flo Richier and Matt Bayliss and, more recently, he added the King of Poland SX award to his bulging trophy cabinet.

Looking ahead to the 2017 Arenacross Tour, Ramette said; “It is cool to return to the series. I have had an amazing couple of years with my awesome SR75 Suzuki team and I look forward to getting back to the UK and the cool line up of Arenas where we have enjoyed so many successful nights racing in front of the amazing UK race fans. Coming back to look for the ‘threepeat’ is something special and I do this with the professional respect it deserves. I will give it my all while having fun with some good racing and great pro class competition.”

Cyrille Coulon; “This series is a big favourite for me. I like the race and the track style sometimes suits my experience. I’ve had a great year with my SR75 Suzuki Team and I like to make good racing for UK fans with many great riders in this series.”

Clearly delighted to continue with the winning partnership, Rob Cooper, Suzuki GB’s marketing manager added; “Ever since winning this year’s Arenacross championship we fully expected to return in 2017 to defend the title with Geoff Walker and the SR75 Suzuki team. Last year was one of the most entertaining and explosive Arenacross tours the series has ever seen. It provided a great spectacle for the crowds and it was great to be a part of the show, and even better to come away having successfully defended the championship with Thomas Ramette. It was also fantastic to clinch the team championship for a second year in a row. Geoff puts together an extremely professional outfit, and in both Ramette and Cyrille Coulon we have two riders capable of fighting for the title again this year, and hopefully they can help deliver another team championship for Suzuki and the RM-Z450.”

With the return of all former Pro champs and a heady line-up of British Motocross talent, the 2017 Arenacross Tour promises to be intense. It all kicks off on Saturday the 7th of January at the Manchester Arena and will then travel to Glasgow, Birmingham, Belfast, Sheffield and London.