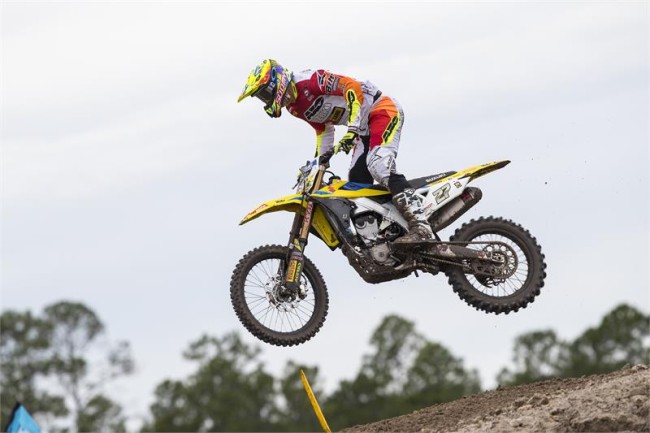 Sad news for Suzuki World MXGP rider Arminas Jasikonis after big crash in the first moto of the USGP left the Lithuanian rider with a dislocated hip. It was all-the-more unfortunate as the RM-450WS rider had just moved into third place in the race and was looking fast in the sandy conditions.

General Manager Stefan Everts explains what happened in the race and what the future now holds for Jasikonis: “He got a good start, moving into third position and was jumping the tabletop when the bike dug-in on soft ground as he landed. He went over the handlebars and the bike hit him and he dislocated his right hip. It’s been put back by the medical team and it’s not looking too bad but he has to have another check-up scan. Providing it is all ok, he should be able to travel back with the team tomorrow, but in what condition, I don’t know. It will be tough travelling for him but it’ll be good to get him back to Belgium so we can do all the tests there. A hip dislocation normally takes many months to come back fully, so we’ll just have to wait and see. Obviously we all wish him the best and will do everything we can to make his recovery as swift as possible.”

For Strijbos, technical difficulties with his bike meant that he had to DNF the first moto, but with the track at its toughest, the Belgian rider put in his best race of the season by placing fifth in the second race. He said: “We knew what the problem was in the first moto so we changed it for race two and I got a good start on the inside. I think I was third after passing Jeffrey Herlings but I didn’t put up too much of a fight when he passed me back as I knew conditions would be very tough. The pace was really high in the beginning and I haven’t been used to running that speed so when I was behind Gautier Paulin, we didn’t push too hard and I knew I could run that pace. I just tried to keep with him and not do anything stupid and that was how the race went. I made some mistakes but no one was too close behind me so I was happy to bring it home in fifth. It’s my best result and I think I showed I am still capable of doing that once I get a good start. I was happy for the team and for the mechanic as they all work hard so it was good to reward them with a top-five finish. I think for myself, I rode well and I didn’t do anything stupid and it’s nice to my confidence and knowing that I still have that speed.”

With the Suzuki World MXGP team pitting out of the JGR Autotrader Suzuki awning for the weekend, there was also Justin Barcia out there on the WW Motocross Park track. The American fought hard in both races, placing inside the top 15 in what was a solid ending to his 2017 campaign.

The mechanics and team will now pack up everything and make sure it is ready for next weekend where Strijbos will now be the sole representative at Assen, Netherlands in what will be the 18th round of the 2017 world motocross championship.