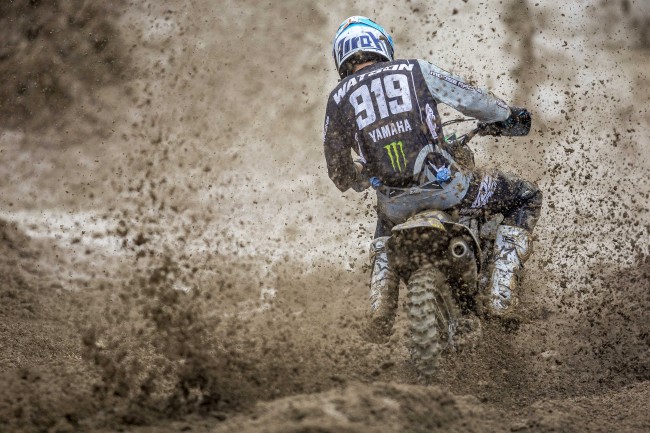 No third consecutive podium for the Monster Energy Kemea Yamaha MX2 Team in the fifth round of the FIM world championship. Jago Geerts finished 6th (2+18) in the mud fest in Mantova, Ben Watson 12th (13+13).

The FIM World Championship resumed this weekend after a five-week break. Unfortunately, Mantova – where our team manager Marnicq Bervoets won the GP 250cc back in 1996 – was hit by thunderstorms on Saturday evening, which changed the track completely. Hard and bumpy on Saturday, muddy and very tricky on Sunday.

PRESSURE
Geerts only had the 14th gate pick after bad luck in the qualifying race on Saturday, when he couldn’t avoid a crash in front of him. The Belgian teenager didn’t lose any sleep over it and took a blistering start on his YZ250F in the first race. Geerts was right behind Prado and Cervellin in third place. The Belgian didn’t waste any time and passed the Italian in the first lap, but made a mistake while putting pressure on Prado and lost one spot. The Belgian regained second place a few laps later, but came under a lot of pressure from Beaton. Geerts kept cool and finished second.
Meanwhile, Watson was struggling the entire first race. The Brit moved up from 25 to 11 after a poor start, but couldn’t enter the top 10 because of two crashes. He crossed the line in 13th place.

HOPE CRUSHED
Geerts’ hope for a third consecutive podium wasalready crushed in the start of the second race. The Belgian touched the rear wheel of Harrup, crashed and had to restart as dead last on the extremely difficult and tricky track. Same story for his teammate. Watson hit the gate at the start and was also facing a catch-up race. The Brit finished 13th, Geerts – who had another crash – 18th.
Geerts is now fourth in the world championship, only seven points behind number three Jacobi. Watson is fifth.

“I rode two completely different races. The first moto was great. I had a good start, made a small mistake, but came back strong and finished second. The second moto was a bummer. I touched the rear wheel of Haarup in the first corner and crashed. I was dead last. It was very difficult to pass in this muddy and tricky conditions. I crashed two more times. Of course, I’m not happy with the overall result, but I can’t complain about my riding.”

“This was my worst Grand Prix since I arrived at the Monster Energy Kemea Yamaha Team. The qualifying race on Saturday was still okay (6th), but the races on Sunday were terrible. I started almost last in both races and it was really difficult to get forward on this kind of track. This is really a big disappointment. I want to forget this GP as quickly as possible. There’s no other option than keep working hard.”

“Of course we all hoped for another podium finish after the strong performance of Jago in the first moto. But in this mud, it’s always a bit of a lottery. Especially the start. And that was the problem in the second moto. Ben hit the gate and Jago went down in the first corner. I immediately knew that the podium was gone. This was not a good GP for us, but we shouldn’t panic. We are only five GP’s far and we are four and five in the championship. Not bad at all.”