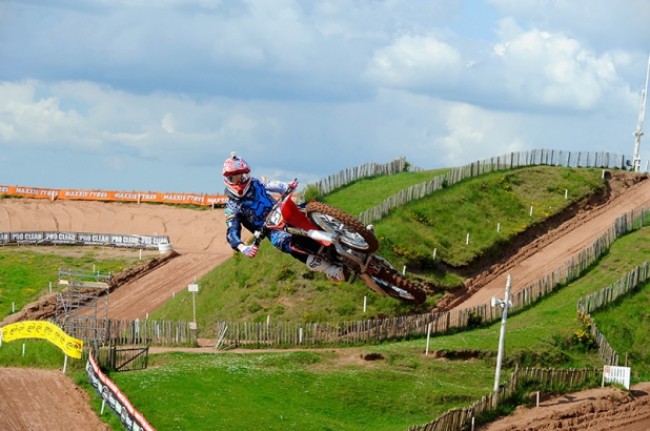 There is a lot to look forward to heading into the fourth round of the Maxxis ACU British Motocross Championship supported by Pro Clean as it gets set to take place on one of the most popular tracks in the world, Desertmartin, Northern Ireland.

Desertmartin will be making a welcome return to the Maxxis ACU British Motocross Championship calendar after a two-year hiatus. There is a massive buzz surrounding the event especially since Buildbase Honda’s very own Irishman, Martin Barr will have the Red Plate firmly bolted to his CR-F250 as the championship leader in MX2.

Martin Barr won the last round of the 2016 MX2 championship, which took place at Hawkstone Park, Shropshire, on the 22nd of May with a 3 – 1 result. It was his first race win in two years with his last win ironically being at Desertmartin in 2013.

Earlier this week the new championship leader spun a few laps at Desertmartin for a couple of exclusive photographers to help promote the race. “I’m really looking forward to racing at Desertmartin, especially now with the red plate, it’s going to be something special in front of all of my family and friends.” He said. “We’re all petrol heads out here so it’s going to be something special. I know the guys at the track have been doing a lot of work over the last few weeks just to get it ready and I’m just hoping they get a bit of weather on their side this time but I’m sure that everybody is going to come out in force to support myself and Graeme Irwin, a couple of lads who have been doing well in the British Championship.”

You can read a full interview with Martin here.

His Buildbase Honda teammate and fellow countryman Graeme Irwin is currently sitting third in the 450cc class, MX1, and is sure to add to the buzz at the event. While those two, as Irishmen, are naturally excited to tear up the red sand in front of the thousands of fans expected to come out and support them, so is everyone else.

The MX1 championship leader Wilvo Virus Performance KTM’s Shaun Simpson said, “I’m looking forward to Desertmartin, the last time I rode there was in 2012 when I was riding for Steve Dixon. I didn’t have a great day there that time but I am looking forward to going back. It’s always well prepared; it’s a nice track and one that I definitely think should always be on the calendar.”

Monster Energy DRT Kawasaki’s Tommy Searle laughed at the memories, “Yeah it’s a cool track. I like Desertmartin; I have had some good results there. Back on the 80’s I went six for six.”

Meanwhile Wilvo Virus Performance KTM’s Adam Sterry and Apico Husqvarna’s Steven Clarke both said that Desertmartin is their favorite track, which is bound to make the action in MX2 extra exciting with Barr, Sterry and Clarke all super pumped to race there.

Clarke trails Barr in the MX2 championship by 6 points and said, “I love Desertmartin, and it’s one of my favorite tracks. I am more of a clay rider but something just seems to click at Desertmartin for me. Rain or shine it’s gonna be good.”

Sterry is currently fifth in the championship after missing the first round due to a broken wrist, which he broke racing the FIM Motocross World Championship in Qatar. “Desertmartin is one of my favourite tracks, it’s always good being back there, I really like the track it’s always prepped well, hopefully the weather is good and we can have some good racing.”

There is so much good energy surrounding the fourth round of the Maxxis ACU British Motocross Championship in Northern Ireland, which will be taking place at Desertmartin on the 12th of June. BT45 5QW, Northern Ireland, is the postcode. Practice starts at 9:00am, the first race starts at 11.55am. Adults are £20 and Children are £5.
– See more at: http://www.mxgb.co.uk/article.php?id=948#sthash.EXDcGSUR.dpuf