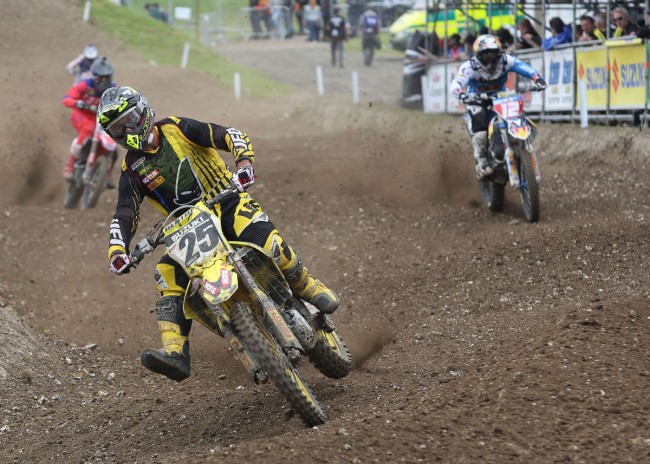 Rockstar Energy Suzuki World MXGP will roll into the paddock at Maggiora and the Grand Prix of Italy for the ninth round of the FIM MXGP Motocross World Championship this weekend with Clement Desalle and Kevin Strijbos both fighting for fitness.

Desalle saw his 2015 title aspirations take a hit with a fall in practice for the French round almost two weeks ago leading to a partial and minor dislocation of his left shoulder. The Belgian had to withdraw from both motos at Villars-sous-Écot and has since been rehabbing the joint and attending physio to be able to compete in Italy. The good news was that Desalle would not need an operation on the shoulder but the 26 year old has been in a plight to regain strength and confidence in his upper body – as well as recover from a blow to his right knee – to be able to consider racing at Maggiora.

“I am working with the physio and also at my place to improve my shoulder and it is going step-by-step. My knee is also difficult too,” ‘#25’ said.

“Clement has been pretty sore the last week, but he has been doing some mountain-bike and cycling which has been going well,” added Team PR Co-ordinator Jo De Munck. “He will do an extensive motorbike training session later today (Thursday), which will be the biggest indicator for his fitness. But for now both Clement and the team see no reason why he wouldn’t be able to take the start in Italy. “

Twelve months ago Desalle was at the heart of an intense battle for victory at Maggiora. The circuit has not been the luckiest of locations for the rider who suffered an electrical problem while on the fringe of a win in 2013 and then crashed off the side of a jump last year that led to a wrist injury that would ultimately end his 2014 campaign.

Also on the comeback path will be team-mate Kevin Strijbos. The Belgian has been resting and convalescing from a painful thumb but in the last two weeks has stepped-up his riding routine and won the first moto at the popular Kester round of the Belgian national series last weekend. “The wrist and thumb is going in the right direction at the moment but I have only ridden the bike three times. We decided to try Kester and things went well so we will go to Maggiora and take it as extra practice and another move towards getting fit again,” the 28 year old said. “I cannot ride much in the week yet because we don’t want to rush the old injury but I have to say that I am looking forward to getting on the gate of a GP again.”

The luckless former championship runner-up took a strong third position at Maggiora in 2014 but has missed five rounds of the series so far in 2015, including the last two in Great Britain and France after complications with his right wrist and hand after surgery.

Maggiora hosts the Italian Grand Prix for the third year in a row and the long hills and undulations of the famous course provide a tight and tricky challenge. The terrain is largely hard-pack with only one or two line variations on many of the switchback, 180 corners. The layout is home to some spectacular leaps and the first steep climb after the third turn is normally packed with fans creating almost a ‘stadium setting’.

After two editions with good weather the forecast for the weekend currently does not look so promising with copious rainfall predicted for Saturday and then more damp conditions for Sunday. “It looks like we might have our first mud race of the year,” commented Rockstar Energy Suzuki Europe’s Glenn Coldenhoff.   “Maggiora is not my favourite track but I’m excited to go there anyway, with or without the rain.”

The Dutchman, a rookie in MXGP in his first term with the RM-Z450, set a personal best finish of sixth overall in France almost two weeks ago and is steadily building into the season. The ‘#259’ raced at Bielstein last weekend for the third round of the German Championship and took a solid second position to team-mate Jeremy Seewer. Coldenhoff registered a ninth place overall in MX2 in 2013 at Maggiora and missed the Italian GP last year due to his knee injury. This weekend will be his first attempt at conquering the hills with 450cc power. “I’ve had a good week, the normal routine and I am feeling strong and fit,” he said.

“Maggiora in the rain? That’s a good question actually,” offered Seewer who is gunning for the front group of the MX2 class again on his RM-Z250 after a difficult French GP where a first moto fall ruined any decent chance of a positive overall result (he was eighth). “It could be difficult with some of those serious uphills, and also the big downhill won’t be a lot of fun in the wet,” he added. “I think we just have to adapt the best we can to the conditions. The goal will be a top-five finish again and trying to improve on last year.”

Seewer comes into Italy hot from a superb double moto win at Bielstein where he defeated Coldenhoff and a raft of other 450cc-mounted racers with his RM-Z250. “I think it was actually one of my best races in the ADAC,” he said. “I won a round of the Masters two years ago but this 1-1 felt pretty good and I had a nice battle with Glenn”.