Desalle, Searle and Lupino on their Semarang GP 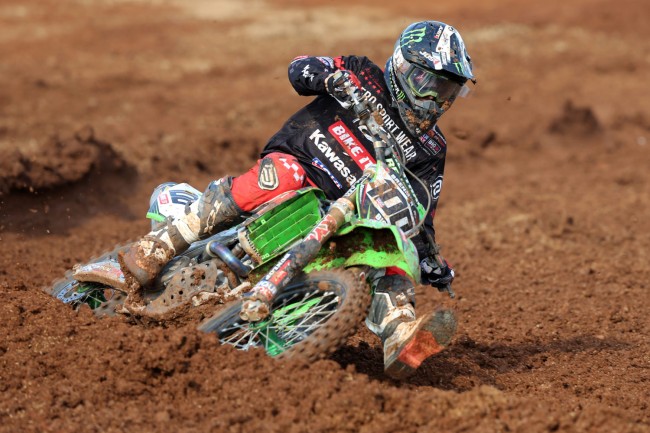 Clement Desalle of the Monster Energy Kawasaki Racing Team strengthened his grip on third in the FIM World MXGP Motocross Championship with a podium finish in the Asian GP at Semarang in Indonesia.

The Belgian, who has so narrowly missed the podium each week since his victory in Russia in May, shot out of the gate in the opening moto to hold third place on the exit from turn one but surrendered three places on the hectic opening lap when he went wide at turn three. After regrouping Clement had advanced back to fourth place at the finish, close behind third. His second start was even better and the momentum he carried out of the sweeping first turn saw the Kawasaki hit the front at turn two. Clement was pushed back to second place further round the opening lap but maintained a solid challenge for victory to the chequered flag to finish second in the moto and third on the day. The scoreline has further strengthened his grip on third in the series standings as he more than doubled his advantage over fourth to thirty-seven points.

Clement Desalle: “It feels so good to be back on the podium after being so many times fourth or fifth in recent GPs, particularly as sometimes I had scored the same points as the third place on the podium! I had two consistent motos today after two good starts. In the first race I lost several positions when I went wide at the third corner, but I could recover to fourth at the finish; then I took the lead before the second corner in the second moto to finish second after a strong ride. My speed was much better than yesterday; we worked on some points last night and I’m happy with my work especially in the second moto. Now the goal is to score more podiums in the coming weeks. But first I will be so happy to see my family again after nearly two weeks away.”

There was more success for Kawasaki as Tommy Searle of Bike It DRT Kawasaki ended the day fifth overall, while Alessandro Lupino of Gebben Van Venrooy Kawasaki Racing was seventh. The Englishman rode two superb races through the pack; initially twelfth in the opening moto he claimed seventh late in the race and followed this up with another solid charge from eleventh to seventh in race two to be rewarded with fifth place overall on the combined result of the two races. Lupino also made advances from eleventh to eighth in race one and tenth to eighth in race two to earn seventh overall. An unfortunate incident with two other riders on the opening lap of the first moto eliminated Julien Lieber, but he rebounded with a tenth place in race two, racing as high as fifth place at one stage.

Tommy Searle: “I’m happy with today! I knew I could be fast even though I didn’t have a good gate pick and I knew it would be a hard day but I stayed positive and pushed through the pack in both races for fifth overall. I was very fast in the first race, posting the third fastest lap of the race on the very last lap! It wasn’t easy with many riders to pass in both races but both the bike and my fitness felt great.”

Alessandro Lupino: “It was a good GP and I’m really happy with the results in those two races. It’s an expensive trip, and the team did everything to give me the possibility to race here. We reached our goal as I scored good points in every motos, even if I felt I was not quite fast enough in the first race. I’m really enjoyed riding the bike; we have worked a lot to reduce the gap to the factory bikes and we are coming closer and closer.”