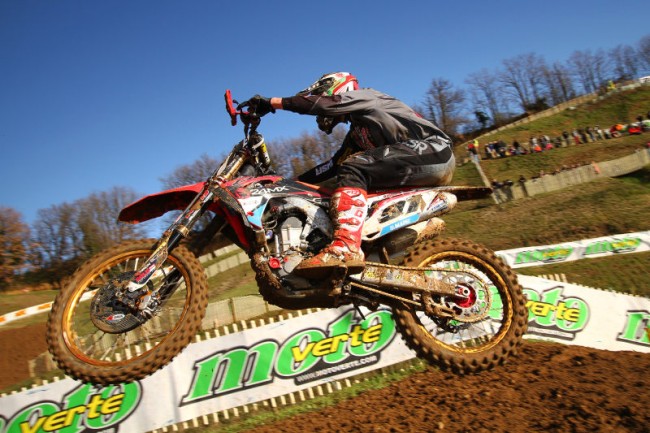 The traditional pre-season race took place under changing conditions on the hard pack and slippery Valence circuit. After heavy rain in the days preceding the race the track had suffered considerably turning the course very much into a single-lined affair.

Karro took a great start in third in the opening moto. Riding alone the 24MX Lucas Oil Honda rider started to tense and suffered painful arms. He also needed to taak off his goggles. Eventually Matiss dropped back to 5th.  Ken didn’t have a great getaway of his first race. However De Dycker moved up to 5th with three laps to go, but he backed off struggling to find proper grip.

Both riders had mediocre starts in the second sprint. This time ‘Keeno’ found a better rhythm and picked up 6th. Matiss too was having a hard time to find passing opportunities, he crossed the line 9th close behind Xavier Boog.

By the last race of the day, the combined MX1/MX2 Superfinal, the track had dried out a little bit more. Still the lack of line options remained a big challenge. While Karro and De Dycker were hampered by their starts the Honda CRF450R mounted pair showed good pace. Ken seemed on his way to the best result of the day when Tonkov made a mistake before him causing the Belgian to hit the deck. In the end De Dycker came home tenth. From 12th in the opening lap Karro bounced back to claim a strong 6th.

Both 24MX Lucas Oil Honda riders will now remain in the Catalunya region of Spain over the coming week for practice in favorable weather conditions. Next weekend De Dycker and Karro will round off their pre-season preparation participating in the Lacapelle-Marival International in France.

Matiss Karro, 6th overall: “It was a decent first outing, nothing incredible and nothing terrible either. Track conditions were quite a handful because it was so slippery. I felt my speed was pretty good, the bike performed well and the team did a good job. So overall as a ‘systems check’ it was okay. Now I’m looking forward to another good couple of days of practice before Lacapelle.”

Ken De Dycker, 8th overall: “I woke up with a stiff back which was a bit unlucky but no excuse. The riding itself was quite hard, because of the mud and simply because most of the track was very one-lined! I had been stuck behind guys while I was going faster so that was a bummer. I know I would ‘ve been closer to where I want to be with better starts. At least we’ve got the first one out of the way and we found a couple of areas that we need to work on.”