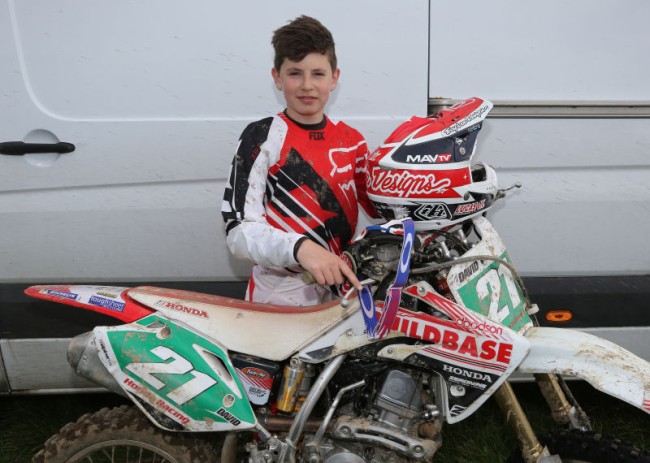 David Robson is a young rider from Northern Ireland who decided to travel the world this year and contest in the EMX150 championship which is a great young series for any young rider. David talked to gatedrop about his great experience!

In Albaida at the qualification camp in March, it was very tough.  I had never experienced a track like it.  The layout was completely different to what I am used to riding.  There were rhythm sections, table tops one after the other, doubles and step downs. The track overall was incredible, when it was wet it was like gravel, but when dry was blue groove the whole way round.  The competition was really hard, 12 riders from different countries competing for 6 places, we rode the 150’s, and were assessed for physical and mental ability.

The first round in Trentino Italy was the hardest of all, it was such a learning curve, from the 25 minute motos to the 30+ thousand people, and being up at 5am and on track for 7am.  Watching the GP on TV is nothing like experiencing it in real life.  The bumps were higher than the wheels and I got lost in the ruts (quite literally).  I had an overall of 19th which was something to build on.

Matterley was by far the best round for me.  The track suited me a lot because of the big jumps, they were much bigger than the jumps we have in Northern Ireland.  I think the riders spent more time in the air than on the ground (not joking).  The setting of the track was brilliant, out in the country, huge fields as far as you could see. My overall was 14th which was my best throughout the year.

Teuschenthal Germany
Teuschenthal was another brilliant round for me.  The dirt was very similar to Tandragee, so I adapted to the track quite quickly.  The track was more or less flat out all of the way round and there weren’t many jumps, but when there were, they were huge.  Again TV doesn’t do the track justice, Tomac Hill was more like a cliff, when doing the track walk we had to climb up the side and with only 4 seconds separating the top 20 riders in qualifying it was always going to be tough.  Germany was a lot easier for my mum and I to get around because I speak some German, so we could order food and get directions quite easily.

Loket wasn’t my best round.  I wasn’t happy with qualifying or my first race.  I had an awful start and wasn’t able to make up many places.  The second day, however, was a different story, I was out to prove a point and got a brilliant start.  I was second around the first corner.  Around the fourth lap I lost some positions and had a huge crash.  I was jumping a huge step down that only myself and 4 other riders were jumping and I landed a bit too far and hit some breaking bumps.  (That’s all I remember).  I was admitted to hospital in Karlovy Vary and received excellent care there, I had CT scans on my head, neck and shoulder and an ultrasound on my abdomen and had an overnight stay.  I was discharged the following day.

I was very disappointed that I didn’t get to ride Lommel following my crash in Czech.  The trip had already been organised, so we went to watch the GP and support my friends.  Lommel looked like an awesome track with really deep sand and huge ruts, hopefully I will get the chance to ride there in the future.

Assen was the best venue on the EMX calender, but I didn’t do as well as I had expected.  On the first day I went out of the gate and was 3rd around the first corner.  On the 4th lap I was running in 4th place when another rider and I crashed into each other.  When I got back up I was in 22nd, I worked hard all race and got back into 15th.  The second race wasn’t so good, I got a bad start, and couldn’t find a rhythm and finished in 21st .

When in Assen we had a tour of the HRC Honda truck.  We met the mechanics who work on the bikes of Paulin and Bobryshev and were given information by Roger Harvey.  The experience allowed us to share a paddock with names such as GP, Bobby, Max Nagl, and Cairoli.  We also had the great honour of meeting JMB, who is extremely down to earth and showed great interest in the young riders, asking how we were, giving encouragement and wishing us luck.

I finished overall 19th in the Championship, which was a good result, but the experience was amazing and I would strongly encourage any young riders who can to take up this opportunity to do so.  I worked with Gordon Crockard, a world champion, who was a fantastic mentor, we couldn’t have asked for anyone better.  He had time and patience for everyone and was always positive and happy to give advice and guidance.  The mechanics, James, James and especially Michael, were a fantastic help and we learnt lots of new information from how to start the bike properly (for my mum) to bike setup.  Everyone made us feel like we were part of a family,  these links have strengthened recently with me getting an invite to race the last 2 rounds of the Spanish Championship with Team VDB-Vico along with Mack Bowense, the Dutch 85cc Champion.  They are providing a bike and full race support, which I am really looking forward to riding Talavera and finishing the year where it all started at Albaida.