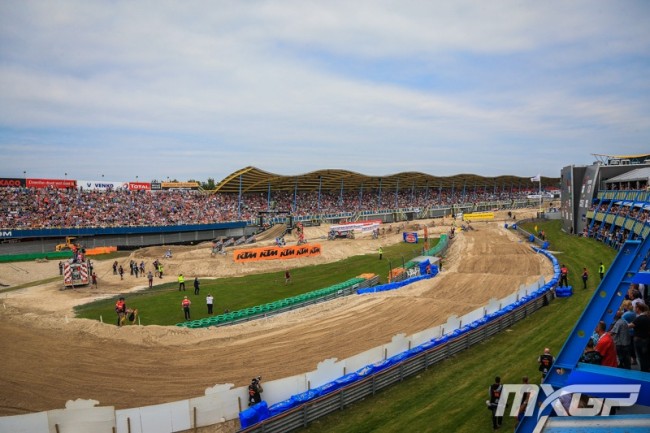 Youthstream released the MXGP provisional calendar at the beginning of July and it listed the Dutch GP to take place on the 21st and 22nd of March but the venue to be announced.

The last few years, the Dutch have had two rounds of MXGP – Valkenswaard usually at the beginning of the season and then Assen towards the end of the year. There’s been speculation regarding Valkenswaard’s future the past few years.

David Luongo, the vice-president of Youthstream, spoke to Tim Gerth from Motorsport.com in Lommel and give an update. It seems like Assen will happen and whilst Valkenswaard appears to be difficult it could still happen too.

“We have to see which of the two it will be and maybe we will do both, that is also an option. We are still talking”, Luongo stated.

If the Motocross Des Nations is a success at Assen then it’s very likely to be back on the MXGP calendar next year but more likely towards the end of the season rather than the provisional date in March.

Due to local politics, Valkenswaard will be more difficult. “It is well known that the situation in Valkenswaard is difficult. For example, the Dakar Pre-prologue and the autocross races in North Brabant have already been cancelled”.

There had been rumours that Youthstream could build a man made track near Jeffrey Herlings house but Luongo stated those talks are “not at the same stage,” so that appears unlikely –  for 2020 at least.

On the British GP at Matterley, whilst it’s unlikely to happen in 2020, Luongo hasn’t closed the door completely. “The costs of organizing a competition are very high, but we don’t exclude it. But the question is also what happens with the Brexit.”

You can read the full article here.