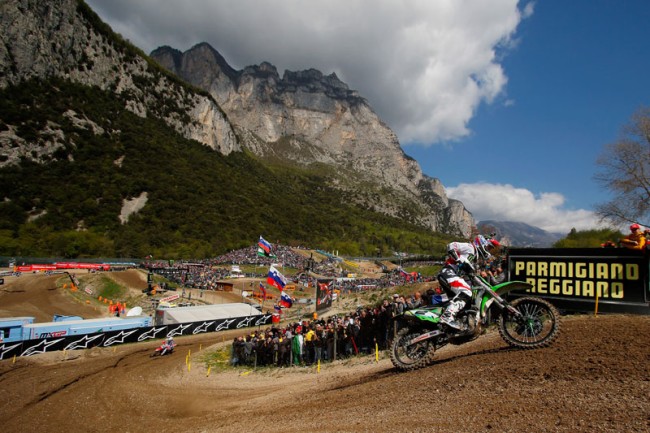 The challenge of Monster Energy Kawasaki Racing Team’s Ryan Villopoto in Italy for the FIM World MXGP Motocross Championship received a temporary set-back when he was eliminated from the fourth round.

The US champion, already a winner this season as he challenges the world stars on strange tracks, had shown his determination and ability to learn quickly when he led qualification for two laps in a hotly-disputed race around a hard-pack track littered with tiny stones, the like of which he had never previously encountered. Eventually earning fourth choice of gate for the points-scoring motos at Arco di Trento, he quickly settled into third place in the opening moto and, keeping the leaders in his sights, only surrendered one place to cross the finishing line fourth.

A similar race on the treacherous surface in race two saw him hold third place for nine of the nineteen laps before he lost control of his bike on the bumpy straight in front of pit lane and crashed heavily. He was able to get to his feet without aid but was unable to rejoin the race. Initial medical investigations in the mobile clinic at the track have revealed no broken bones, but he will undergo scans on Monday to confirm these findings. Ryan now holds down sixth place in the world standings, but is only five points shy of fourth.

Teammate Tyla Rattray withdrew from the GP on Sunday morning as he had suffered severe headache the previous evening in the wake of an incident during the qualifying race when another rider hit him. The South African was also due to be medically examined in Monday.

Ryan Villopoto was unavailable for comment after crashing during the second moto, but prior to racing he had commented: “This is a difficult and technical track. You need to be smooth to be fast.”

Tyla Rattray: “It’s been a very disappointing weekend for me. In the qualifying race I was in the top twelve when another rider hit me before the end of the first lap. I hit my head pretty strong, and together with the team it was decided to take it easy and not to race today as I had a strong headache Saturday evening. I’ll visit my doctor on Monday and, if everything is good, we’ll prepare for Valkenswaard.”

Jordi Tixier returned to racing for the Monster Energy Kawasaki MX2 Racing Team with third place in the fourth round of the FIM World MX2 Motocross Championship at Arco di Trento in northern Italy. 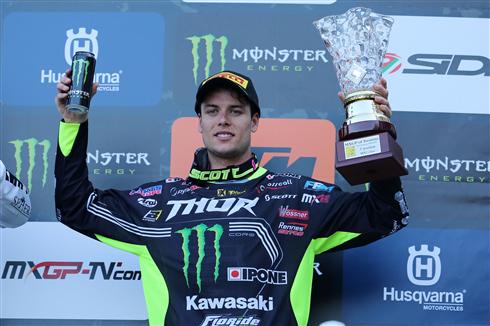 The world champion had not raced since early March but showed few signs of rustiness as he finished third in qualification and followed this up with identical finishes on both GP motos. Jordi and the team had utilised the time well during his enforced absence from racing to work on his personal bike set-up and the benefits were clear to see as he holeshot both GP motos and maintained his top three ranking to the end of both races.

Teammate Dylan Ferrandis was coming off victory in the previous GP in Argentina, but he has never felt comfortable on the hard-pack track, which is littered with small stones. Starting the weekend as joint points leader Dylan wisely took no risks from moderate starts to end the day fourth overall from 5-4 moto finishes; he retains a strong second place in the standings, just 13 points shy of the series leader.

Max Anstie and Monster Energy DRT Kawasaki have also used the weeks since they returned to Europe to work on set-up and the Englishman was rewarded with a second placed start in the opening moto. Unfortunately he surrendered several positions after taking too long to settle into a rhythm, but he struck back strongly during the second half of the race to match the lap times of the leaders and narrowly miss third place. He again fought hard in race two on a track with few passing opportunities to adsvance from eleventh to seventh.

Thomas Covington had bad memories from the previous year of a track so different to those on which he raced in his native USA, and again failed to settle. After crashes in both motos he narrowly missed the points with twenty-first in race one before crossing the finish line sixteenth in race two. He has dropped to ninth in the world standings but is only fifteen points away from fifth place and is looking forward to climbing the rankings again in the coming weeks.

Jordi Tixier: “It’s great to be back on the podium after some difficult events. My family, my team and some other people helped me to recover after Thailand, but now I’m back and this weekend I proved with a podium result that I still have a strong motivation. For sure it could have been even better with two holeshots but this podium is a first step. We did some good testing with the team to improve our set-up; everyone worked hard and we got the reward with this podium. Third was my position this weekend; the grip is always strange here and I didn’t want to make any mistake.”

Dylan Ferrandis: “This weekend I was the fourth man on this track, one of the worst that I know. I had no fun riding here, and I just did my best to take good points and leave the track safe this evening. We have to find why my starts were so bad this weekend, and I also had a small crash in the first race but overall I only dropped thirteen points to Herlings. I knew that this weekend would be difficult, and next week it will be his home GP but I know that on a sandy track I can get some good results and we’ll go training in Holland this week with the team.”

Max Anstie: “We have worked hard and got the starts sorted now, but I need to settle into a rhythm quicker. It was the same in both the qualification race and the first moto. I was strong at the end and almost caught Jordi for third, but I had simply given myself too much to do after those early laps. My start was not so good in race two and I spent the entire race catching up to seventh.”

Thomas Covington: “I never had a feeling with this track; every time I tried to push in both motos I ended up crashing. I had a bad gate choice after the qualifying race, and had no chance to get a good start today. It’s a bad weekend, but I have already put it out of my mind and can focus on the next one in Valkenswaard. I like this track; it’s a good one and I did well there last year.”