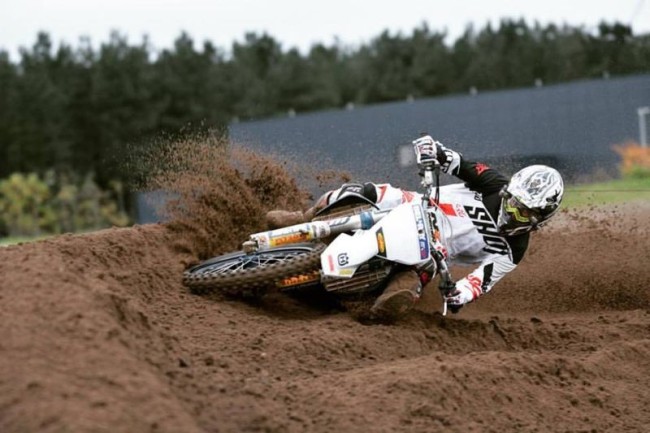 Battling through the near 40-degree heat the young American kicked off Sunday’s final races with a convincing holeshot in MX2’s opening moto. Leading the field for the first two laps, Thomas went on to secure his best race result from the season finishing moto one in fourth place.

Not getting such a good start in moto two Covington powered his way from 14th at the end of lap one to an eventual fifth at the chequered flag. Collecting 34 championship points from both motos he missed out on his first overall podium result of the season by just one-point.

For Covington’s MXGP teammate Max Nagl a series of mistakes in moto two frustratingly prevented the German from hunting for his sixth podium result of the season.

Despite not getting a perfect jump out of the gate in the opening moto Nagl emerged second out of the first corner. Following race leader Tim Gajser for the greatest part of the race he lost two positions in the last four laps to finish fourth. Getting a bad start in moto two he was forced to push hard, suffering three small crashes. He crossed the line in 16th for 10th overall at the GP of Lombardia.

Once again showing he has the speed to battle for the top 10 in MXGP, Nagl’s teammate Christophe Charlier was unable to get the starts that he wanted in either of the two motos. The Frenchman wrapped up the weekend with 14/12 results for 12th overall.

Rockstar Energy Husqvarna Factory Racing’s MX2 rider Max Anstie enjoyed a GP of mixed fortunes. The young Brit put in a strong moto one performance to cross the finish line in fifth place. Hitting the gate and loosing a lot of time at the start of moto two, he later saw another rider crash in front of him and was forced to abandon his race.

Continuing his strong form in his first season racing the MX2 class of the Motocross World Championship, Conrad Mewse earned his second consecutive top 10 overall result at the GP of Lombardia. Finishing 16th in moto one the 16-year-old Brit came back stronger to wrap up the weekend with ninth in MX2 moto two.

The Rockstar Energy Husqvarna Factory Racing team will now take a short break before returning to action at round 13 of the FIM Motocross World Championship in Loket, the Czech Republic on July 23/24.

Thomas Covington: “We had a great GP here in Mantova. On Saturday I struggled a little bit. The track was rough and difficult and I couldn’t find a good rhythm. We spoke a lot with my team manager on Saturday night and along with our WP engineer we made a lot of changes in our suspension set-up. I felt better straight away on Sunday. In the first moto I got a big holeshot and rode in front for a few laps before eventually falling back in fourth. Then in the second moto there was a problem with the gate. I think I was 15th in the first lap and had to battle my way to fifth place. I missed the overall podium by one-point and it’s a bit of a bummer but I’m really happy with how I raced. I’m getting better every weekend and I think the top five in MX2 is where I belong.”

Max Nagl: “The weekend started well for us. I got a good start in qualifying and raced to third position. On Sunday I think it was close to 40 degrees and that made it really difficult to retain a good race pace. I didn’t get a good start in the first race but somehow I managed to be second in the first turn. I did my best and closely followed Tim Gajser for the first 22 minutes of the race, but then I felt the heat getting on me. I finished fourth which wasn’t so bad. In the second moto I had a bad start so I started riding aggressively. Unfortunately I had three small crashes during the race and ended up finishing 16th. It was a disappointing result for the team and me as we could have been on the podium again. I’m still fourth in the championship standings but I think a third or even a second position is within my reach. We’ll keep on working with that goal in our minds.”

Christophe Charlier: “We really struggled with the heat during the whole weekend. In the qualifying race I crashed right after the start so couldn’t do anything better than 19th. Then in the final races I had bad starts in both motos and that made my job a lot harder. Once again I showed I have the speed to battle for the top in my class but unfortunately without getting good starts it’s impossible to make it happen. We now have a small break in the series. My plan for the following GPs is to continue battling for the top 10 in my class. If my starts are good, I know I can do even better than that.“

Max Anstie: “My riding was good this weekend. I had a good pace from the start of the GP but crashed in the qualifying race. My starting position for the final races wasn’t ideal but I still felt good on the track. In the first race I made a good start inside the top six but went on to make a couple of mistakes. I finished fifth but I know it could have been much better. For the second race I was motivated to go again and do well. On the start the gate went a little bit down before hitting the ground so I hit it. It took me some time to get going and I was in the middle of everyone. Then someone crashed in front of me and hit my leg with his bike. I was in 24th at that time and felt pain in my leg so I decided to pull out. Luckily I’m fine now and motivated to get back to work for better results in the next rounds.”

Conrad Mewse: “I struggled a lot with the conditions this weekend but still I’m happy I got away with another top 10 result in my class. The heat got to me and I wasn’t really used to it. I got an OK gate pick finishing 20th in qualifying. In the first race I didn’t take a very good start and struggled a lot to come back so I finished 16th. Then in the second race I actually got a much better start and I finished ninth. It was a very difficult race and I was very tired after the second moto. It’s really nice to get another top 10 result and hopefully we can go on from here and look for even better results.”