Covington on his win, Anstie on his podium! 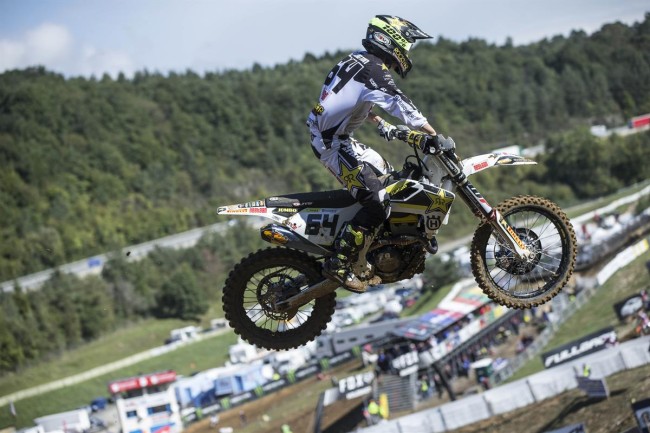 Successfully battling through the extremely muddy conditions at the Villars-sous-Écot circuit, Thomas Covington has rounded out the 2017 FIM Motocross World Championship by claiming the overall MX2 class victory at the final round of the series in France. Gaining valuable points the Rockstar Energy Husqvarna Factory Racing Riders has climbed to fourth in the final MX2 World Championship standings.

Covington entered the final in France determined to continue his strong run of form. Securing a sixth-place result during the MX2 qualifying race, the American proved more than ready to face the incredibly demanding track conditions during the two final motos on Sunday.

Starting the opening moto in second, Thomas used his speed in the French mud to take the lead before the end of the opening lap. Keeping his head down he retained his advantage for the rest of the moto and despite a late mistake the American claimed his fifth victory for the season. Getting the holeshot in moto two, Thomas crossed the line in second to secure the overall class victory.

Securing third in the MX2 World Championship standings during the previous round in The Netherlands, Thomas Kjer-Olsen was looking to end the season with a good overall result in France. Collecting 7-12 results the young Dane wrapped up an impressive rookie MX2 class season with sixth overall at the GP of Pays de Montbeliard.

In the 450cc class, the MXGP of Pays de Montbeliard was the ideal chance for Max Anstie to show his mud racing prowess. Claiming an impressive qualifying moto victory on Saturday, the young Brit battled to 4-2 results to eventually secure third overall at the GP. Anstie’s highlights came in the second moto with his runner-up result.

With the track forming deep and sticky ruts, the FC 450 powered rider took the holeshot and lead the first 14 laps. Getting passed by Jeffrey Herlings with three laps to go, Anstie took the battle for the moto victory to the line to finally secure the runner-up result. Following a solid second half of season, Anstie wrapped up his rookie season in the 450cc class with ninth in the 2017 MXGP World Championship standings.

For Max Nagl, the final round of the series in France saw the German collect 14-12 moto results for 11th overall. Max finished the series by claiming eighth in the 2017 MXGP World Championship standings.

The Rockstar Energy Husqvarna Factory Racing team will return to action at 2017 Motocross of Nations in Matterley Basin, United Kingdom on September 29/30.

Thomas Covington: “It’s just great to end the season with overall victory in such demanding conditions. It was a perfect confidence booster for the coming season. I got the holeshot in the opening moto and that felt great. My goal was to keep it on two wheels while trying to retain a safe gap to the rest of the field. The track was rough and quite difficult to ride. A few laps before the finish I got stuck in a rut but luckily my gap was big enough to secure the moto win. In moto two I got another holeshot but quickly got passed by a couple of riders. I kept my head down and managed to make a few passes for second at the line.”

Thomas Kjer-Olsen: “The track was very rough. In the opening moto I was racing in third place for the biggest part of the race but made a mistake and fell with eight minutes to go. Overall, it wasn’t a bad moto and I managed to secure seventh at the end. Then in moto two I didn’t get the best of jumps at the start and had to start from the back of the pack. It wasn’t my best race for the season and I finished 12th. Looking back to this season, we had some great moments. It was my first full season in the MX2 class and already I’m looking forward to 2018. We have a long winter ahead of us and my goal is to keep working to improve in all aspects of my riding and racing.”

Conrad Mewse: “I had an off weekend here in France. My speed was good on Saturday but then I couldn’t race the way I wanted to on Sunday. I struggled with the track conditions and not being able to get good starts left me with a mountain to climb. The season might be over but I will keep working hard to get back stronger next year.”

Max Anstie: “The weekend started really well for me. I had a good qualifying moto and managed to get the win. It might have just been a qualifying moto win but it was my first race victory in the 450cc class. On Sunday we had a lot of rain and that made things harder for everyone. I did the best I could in the opening moto. Conditions were tricky and it was vital to avoid mistakes. I was happy with fourth and thought I could do even better in moto two. My start was great in the second race and I managed to lead the for much of the race. I had a good battle with Herlings down to the finish line.”

Gautier Paulin: “This last GP of the season was a tough one for all. It was cold, wet and very muddy. Despite tough track conditions my Husqvarna was working great throughout the weekend. In the opening moto I didn’t get the best of starts so had to battle my way to fifth. Then in the second moto I got loads of wheel spin out of the gate so had to push hard again to get back inside the top six. I really don’t have words to thank the Rockstar Energy Husqvarna Factory Racing crew for all their hard work during the season. Getting third in the championship we showed the base is there to go a step higher in 2018.”

Max Nagl: “It was a difficult GP for me. All the rain falling during the weekend made the clay track too tough to ride. In the opening moto I didn’t get a good start and soon after I found myself stuck behind two riders who had crashed. I feel that I could have done better than 14th but it is what it is. Then in moto two I got too much wheel spin out of the gate and couldn’t get the momentum needed for a decent start. Getting covered in mud right out of the gate made things a lot harder for me for the rest of the moto.”