Covington on another tough day at Pala 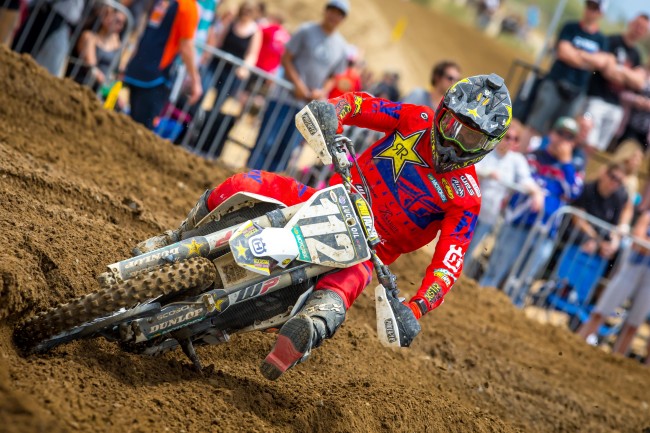 Round 2 of the 2019 AMA Pro Motocross Championship made its way back to Southern California on Saturday for the return of the Fox Raceway National in Pala, California. The Rockstar Energy Husqvarna Factory Racing Team captured a pair of solid top-five finishes in the 450MX class as Zach Osborne (4-5) and Jason Anderson (5-4) flip-flopped moto finishes to score fourth and fifth overall, respectively.

450MX
Osborne continued his top-five moto streak into the second round with two consistent finishes aboard his FC 450. In Moto 1, he got off to a ninth-place start and worked his way up to sixth by lap four. From there, he put on a charge to break into the top-five on the final lap. He held strong to capture fifth. In Moto 2, Osborne began in eighth-place on the opening lap, working his way into fifth by lap two. While in fifth, he caught up to the rear-end of his teammate, Anderson, and the Rockstar Energy Husqvarna duo went to battle for fourth. Osborne made his move around Anderson about halfway through and from there, he set his sights on the podium battle. With only a few laps to go, Osborne chased down the second-place rider and put forth a valiant effort to reach the podium, finishing only 2.7 seconds off with fourth-place. With moto scores of 5-4, Osborne tied in points with Anderson to ultimately claim fourth overall with a better Moto 2 finish.

“It was a pretty solid day for me with 5-4 finishes and I have to be content leaving California healthy,” Osborne said. “This track was brutal today. This is the one that I was the most nervous about as far as the schedule goes and I came out with two decent results. I feel good about my position moving forward and I’ll just keep hammering.”

Meanwhile, Anderson began only his second round back from injury on a good note, qualifying third overall in the 450MX division. Anderson powered his FC 450 into third off the start of Moto 1 and he battled for second early on. Eventually settling into third, Anderson went to battle with Eli Tomac where he ultimately finished fourth. In Moto 2, Anderson got off to a fourth-place start and he quickly worked his way into third. He made an early charge to close in on the front-runners but he was soon joined for the third-place battle. He bounced around inside the top-five for the remainder of the race, taking fifth in the moto and fifth overall for the day.

“My weekend went pretty good,” Anderson said. “The first moto, I kind of just hung in there for a fourth place and stayed with the guys. The second moto, I was riding good but I didn’t really have it in me to up the pace comfortably, so I tried to latch onto third and fourth and do my best to finish strong.”

250MX
Team rider Michael Mosiman captured a top-10 overall finish with 8-10 scores on the day. In Moto 1, Mosiman didn’t get off to the best start as he rounded the opening lap in 14th place. He climbed his way up to eighth just before the halfway point, getting past his teammate, Thomas Covington, on lap seven. He made a hard charge in the final half of the race to ultimately secure eighth. In Moto 2, there was a slight glitch in the gate and multiple riders ran into it – including Mosiman, who got off the line in the dead last position. He worked his way up to 24th on lap one and continued charging through the pack to ultimately finish 11th in the second moto and eighth overall for the day.

“My starts were poor today,” Mosiman said. “The first one, I kind of wheelied out of it so we made a little adjustment for the second moto and then the gate flinched and I hit it, so I was dead last. It’s brutal out there when you’re really charging for 30 minutes but I’m pleased with my fitness. 8-11 finishes are not what we work for and not what we wanted but all things considered, I’m happy with how I rode.”

His teammate, Thomas Covington, made great strides in his racing at Round 2. Covington got off to a great start aboard his FC 250 in Moto 1, where he ran inside the top-five early on. He battled inside the top-10 for a majority of the race, finishing 11th. In Moto 2, Covington also fell victim to the gate flinch as he began outside the top 25 as well. He did his best to make some passes where he ultimately finished 25th in the moto and 17th overall.

“Today started out pretty good, I got off to a good start and ran in the top-10 for most of the first moto, so that was a step forward for me,” Covington said. “In the second race, I ended up hitting the gate with a few guys next to me and I just had a tough time finding my rhythm for the rest of the moto. I’m going to go back to work this week and try to make another step.”

Team rider Jordan Bailey got off to a good start in Moto 1, completing the first lap in the eighth-place position. He battled just outside the top-10 for the first half of the race and he ultimately finished 17th. In Moto 2, Bailey began just inside the top-20 off the start and he worked his way up to an 18th place finish. With combined scores of 17-18, Bailey finished 20th overall to salvage some points toward the overall championship.

“It was a tough day,” Bailey said. “We’re working on getting things dialed for Colorado to get some better results because this bike is a really good bike, I’m just not racing that great. We’re going to go back to work and improve, that’s all we can do right now.”