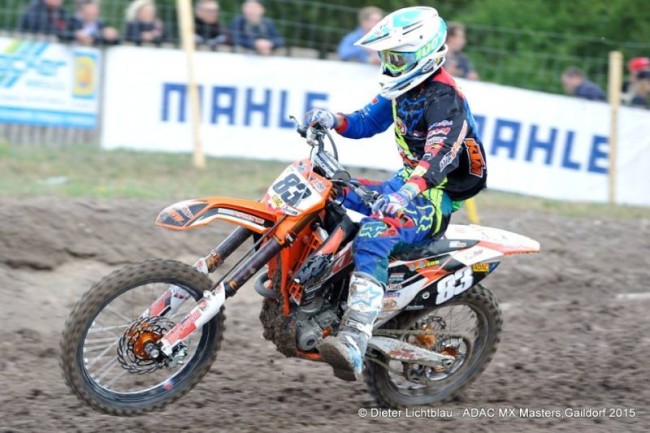 The Coupe de l’Avenir took place at the weekend and over the years Belgium seem to make a habit of winning the event and this year was no different as a strong team of Nathan Renkens, Daymond Martens and Jago Geerts didn’t disappoint and won the overall event. Nathan Renkens was the star man for Belgium as he won two out of the three motos to win the overall from Alvin Ostlund.

Alvin was the star man for Sweden and he was able to lead his team to second overall as they were the closest challengers to Belgium on the day. Alvin has had an impressive season as he finished up fifth in the EMX250 championship – he is no slouch! Nathan has had an up and down season in the EMX125 championship but he is a big guy and it looks as though the 250 will suit his style better, he could be a front runner in the EMX250 class in 2016 if today is anything to go by.

Top Brit at the event was James Harrison as he rode solid and consistent to finish 3-3-4 to end up third overall, he just didnt have enough for the front two runners on the day. Unfortunately team GB just missed out on a podium which is a real shame for them, Liam Garland came alive in the last moto to finish fourth but it just wasn’t enough for GB to finish on the podium.

Surprise package of the event has to be Latvia who nicked the podium from GB. Karlis Sabulis was the main man for Latvia on the day as he rode very consistent with 6-6-5 finishes for fifth overall which was an impressive result. Thomass Sileika hasnt had the season he would have wanted but he finished the first moto in fourth place which was a good result for him and helped his team achieve an overall podium.

Team Ireland had something to cheer for as John Meara took the holeshot and led the first moto until he made a mistake, he was still able to bring it home for seveneth position which was a fantastic result. John was able to back this up with two nineth’s in the next motos to prove it was no fluke! Ireland ended up seventh overall but it could have ended up a lot better as Glenn McCormick and John where running fourth and fifth in the last moto but they both collided together in a racing incident but both will have been happy with the speed.

It was a successful weekends racing at the Coupe de l’Avenir, Congratulations to all the teams who took part and Belgium on yet another win.