Costly DNF for Gilbert at Desertmartin 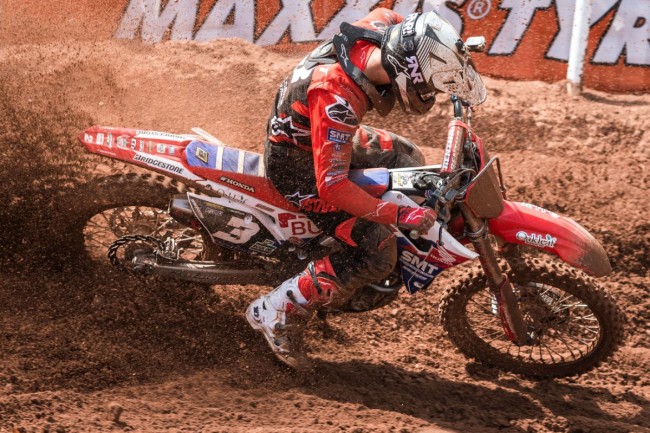 Buildbase Honda’s Josh Gilbert grabbed the MX2 series lead in the opening race at round five of the Maxxis ACU British Motocross Championship supported by Pro Clean at Desertmartin on Sunday but lost it in moto two when a technical problem forced him out.

With his MX1 team-mate Lewis Tombs sidelined with a broken hand sustained last time out at Blaxhall, Josh was the team’s sole representative and after a close-fought qualification session he sat second in a field that was packed with Grand Prix riders.

Starting inside the top 10 in the first 25-minute plus two lap race, Josh made a succession of quick passes on his CRF250R and carved his way through the field up to fourth.

A much better start in the second moto saw Josh leading but he slipped back to fourth and then had to withdraw with a technical issue.

“Qualification went well and me, Dylan Walsh and Bas Vaessen went quicker and quicker as the session went on and I ended up in second just over half-a-second behind which I was happy with,” he said. “I didn’t get a great start in the first moto – I was about eighth – and struggled to find a rhythm the whole race so it was good to get up to fourth and I briefly took the championship lead when Dylan finished behind me.

“In race two I got into the lead within three corners and then Dylan, Bas and Alvin passed me but once I settled down I felt that I was riding a lot better and found the flow and felt like I was edging Alvin in a bit but I could feel my bike slowing up a little bit and then it stopped. It was frustrating and I’m gutted to be honest but there’s still time to pull the points back.”

As a three-time world champion, team boss Dave Thorpe knows that you need to take the rough with the smooth when you’re involved in top-flight motocross.

“I really feel for Josh,” he said. “Technical problems are part and parcel of racing at this level and what happened in race two was unfortunate but, being positive, Josh looked fast among some guys who are doing well in the world championship and he can clearly hold his own.

“He’s a great rider from a great family and his class is clear for everyone to see. Yes, it’s disappointing but we will come back stronger from this – it’s days like this that build character and Josh is already a fighter.”