Cooper Webb on his first win of the year 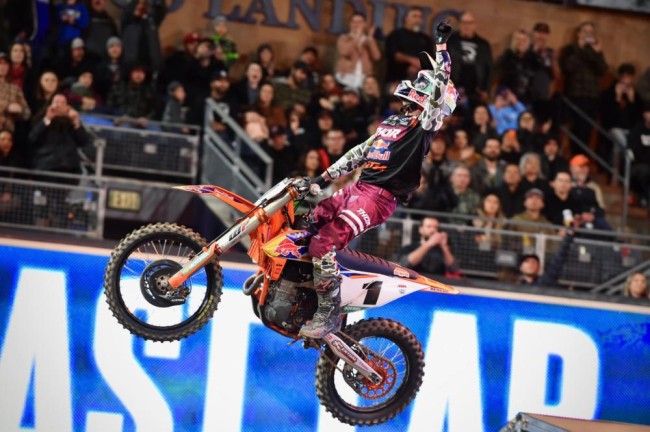 Cooper Webb won his first race of the year after a great battle with Adam Cianciarulo to vault himself back into title contention for the 2020 supercross championship. The defending champ admitted he got a big confidence boost from last week’s ride that saw him pass Rocen in the final turn but, with his win in San Diego and Roczen only finishing sixtrh, Webb is now just nine back of the points leader and right back in the mix for the title.

“It was a great main,” said Webb. “It has been up and down so far (the season). Last week went well and this week was awesome. I really got to give it up to the team, they worked hard on the motorcycle to get me comfortable  and I feel my whoops were a lot better even though I ended up going back to the jump line, but I was pretty comfortable all day.  Adam was really riding well, I wasn’t making up any time, especially early. As the track kind of deteriorated, as he said, it’s hard when you are leading, you want to try things but you don’t want to make a mistake so it’s tough that situation for sure. We had a few battles and it was honestly a fun main event and it’s cool to walk away the win, for sure.”

“I got into the lead early and then Adam [Cianciarulo] made a good aggressive move on the inside and I just kind of let him go. The track, I knew it was going to be hard to pass and I knew it was going to be a long Main Event so I was just kind of riding in there. I tried to make a pass a few laps earlier but we played cat and mouse which allowed Blake [Baggett] to catch up and I didn’t want to do that. It feels good late in the race to get that pass and the win tonight.” 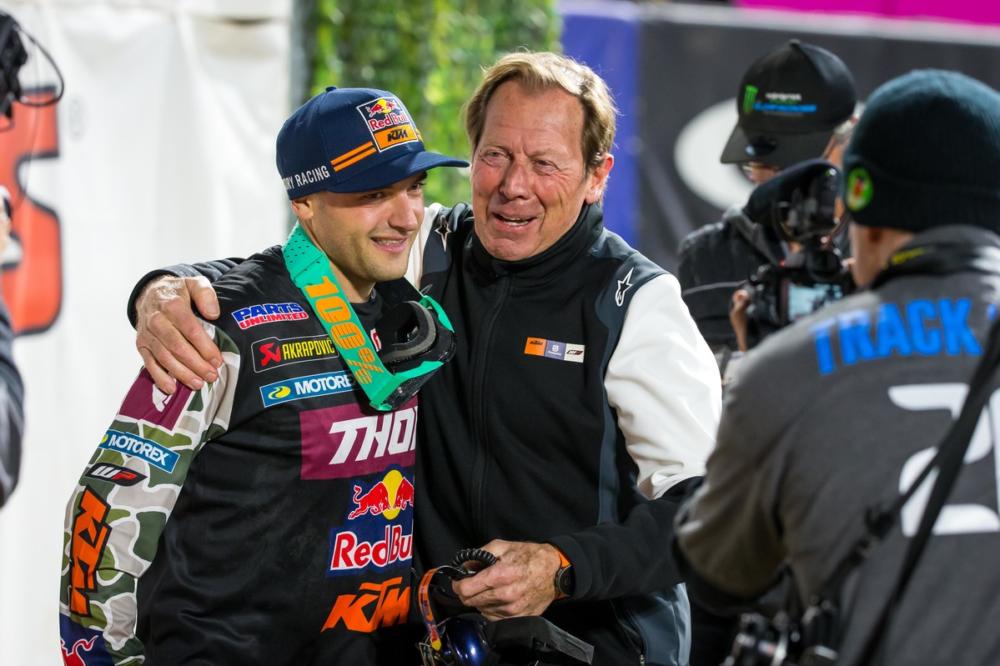 A happy Webb with a delighted Decoster Image: Align Media

“We hadn’t raced each other in a long time,” commented Webb on the battle with long-time amateur rival Cianciarulo for the win. “So it was cool, he’s a rookie so you think he is going to make rookie mistakes but he was really, really, solid tonight and very smart. His riding style is really good and suits the 450 really really, so it was almost like you were battling a seasoned 450 guy. obviously it’s cool to be able to look back and think that we are up here on the biggest stage, I think he is 23 and I am 24, so it’s pretty cool.

Cianciarulo also commented on racing Webb for the win in a 450 supercross after battling in amateurs. “Obviously there was other guys (back then) but when we raced each other, he was looking at me and I was looking at him but now it’s just funny that we were able to go 1-2 tonight, there are so many other people, , you don’t really focus on any guy really. You just know everybody is fast and it was cool that it kinda came down to us tonight, it brought back some memories, it was super fun, but obviously I didn’t deserve it (the win).”