Cooper Webb: I knew coming in I wasn’t going to be at my best 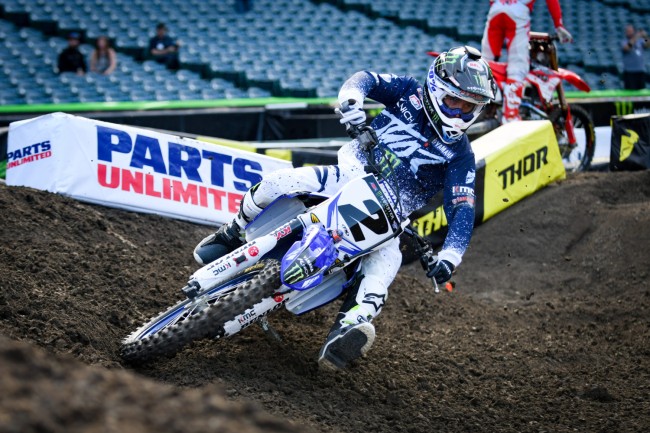 Cooper Webb has revealed a pre-season injury has prevented him from showing his true speed in the opening supercross rounds.

Speaking to DMXS radio, Webb opened up on why he has had a tough time in the opening four rounds of the year. “Unfortunately I did have a little injury in December,” admitted Webb. “It wasn’t anything major, an ankle injury kept me off the bike for two and half weeks in December. It was a weird deal, we were out testing with Yamaha at the test track and the end of the day we were trying one more thing and he ended up falling over in a corner twisted my ankle.”

“I kept it pretty quiet and tried not to let it phase me or bug me and do everything I could to get ready. When I got back on the bike it was pretty much time to go racing. It wasn’t ideal, especially coming back off the thumb.

“It is still a lot to learnt he class is no joke right now.” explained Webb on moving up to the premier class in supercross. “The 250 class was a learning curve for me as well. I still think it’s there, it’s crazy how fast people can write you off. I think all the work is done in the off season, and I haven’t had enough time to put myself in the position I can be.”

“I didn’t start riding until, November 12th. I knew coming in I wasn’t going to be at my best and it’s tough to go race these guys when they are 90 or 100% and you aren’t close to that. I think that lack of riding, I missed out on testing, on speed, it all adds up.”

But Webb feel things are going in the right direction and he should be back in top form within the next few weeks.

“I felt like last weekend was a step for me,” insisted Webb. “In the main event I rode well and got eighth, I was battling with a guy that won the heat race and passed Seely, who won a race and was on the podium the week before. I’m not where I want to be but I am just happy to make progress each week and that’s what we are doing.  I think in the next few weeks I will be up to the 100% range.”

And, despite a brief run-in with teammate Justin Barcia a couple of week ago, Webb insists all is good between the pair.

“We are good, we rode together quite a bit before the season.  I have known Justin for a long time. We both have a lot of aggression so it works out, it’s been nice having a teammate to push off of and try each others settings. It’s been cool to see him do well, obviously I want to beat him and all that, but I have a lot of respect for him.”

Webb also admitted that last season took it out of him physically and mentally but believes that he has made the necessary changes to show his full potential this season, once he is healthy.