Cooper Webb going for the win at USGP! 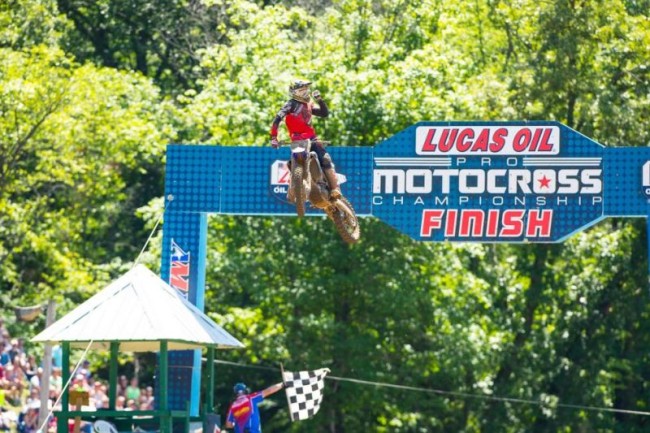 Cooper Webb has started the hype for the USGP by stating he thinks he can win the MXGP class!

Speaking to Transworld motocross Webb said: ‘I absolutely think I can win, but I just don’t want to put too much pressure on myself.’

Webb of course is the current 250 West coat supercross champion and is America’s best young prospect for the future. The Star racing Yamaha rider would have been in contention for the 250 outdoor title if it hadn’t been for injury and won races when he came back to prove the point.

Never short on confidence, Webb has huge expectations for himself in his debut 450 ride, the last person to win a 450 race while being a 250 rider? The great Tony Cairoli who stepped up to a 450 and promptly won the British GP in 2007.

Interestingly, Webb said that he watches the World Championship and knows how fast the guys are, but with home track advantage the American believes he can run at the front! Read more at: http://motocross.transworld.net/news/cooper-webb-mxgp-on-the-big-girl/#qPtxOK5oYKQ1iUmP.99

After having some top Americans choosing not to race one of the biggest races of year, perhaps in fear of losing, it is refreshing to see an American taking some pride in racing the USGP and going all out to win but not being scared to lose. With Dean Wilson and Jason Anderson also looking to be on the podium, the AMA boys will be doing their best to keep the GP regulars off the box!

And with Tony Cairoli back on the bike and targeting his comeback for Glen Helen, it might just turn out to be the best Grand Prix of the year!