Cooper and Ferrandis on St. Louis 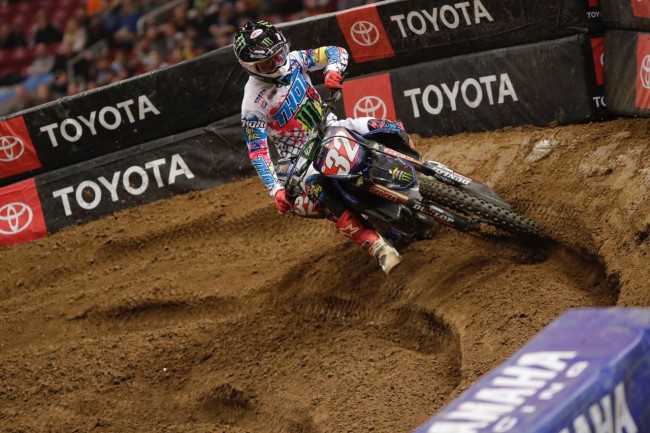 On the heels of his first Monster Energy AMA Supercross win, Justin Cooper crossed the line second for another podium finish to help grow his lead in the 250SX West Championship, Saturday night in St. Louis, Missouri. Monster Energy Star Yamaha Racing teammate Dylan Ferrandis battled back from a first-lap crash to salvage points in 12th. he
The day started out well with Ferrandis topping the timesheets in qualifying and Cooper right behind in second. When it came time to race, both rider’s starts made for a challenging night at the Dome at America’s Center.

The New Yorker dodged a couple of bullets in his Heat and was able to work his way to a third-place finish. It was another difficult start in the Main Event, but Cooper quickly advanced from seventh to fifth. He kept that forward momentum rolling and moved into second with five laps remaining. Although Cooper was hoping for another win, his efforts expanded his lead in the championship to five points.

Unfortunately for Ferrandis, he was unable to improve upon his fourth-place Heat finish in the Main Event. After the start, a racing incident in the rhythm lane had the defending 250SX West Champion on the ground. The Frenchman got back up but had to pull in to the mechanics area to repair crash damage to his bike, losing even more valuable time in the 15-minute-plus-two-lap race. Undeterred, he put forth a heroic effort to cover as much ground as possible and cross the line 12th to leave the second round fourth in the standings and 15 points behind his teammate.

Monster Energy Star Yamaha Racing Team Manager
“Although not what we were hoping for, tonight was still positive for us. Another podium for Justin and a good finish to keep the red plate, but bummed for Dylan. Unfortunately, he got caught up in a crash on the first lap, but he never gave up and scored some important points. We will carry on to A2 and get back on top.”

Justin Cooper
Monster Energy Star Yamaha Racing
“Last weekend I had it pretty easy. I was just out front clicking off my laps. This weekend was a different story. I felt good all day, but I didn’t put myself in the best positions in the races tonight. I just had to put my head down and take my time and come through the pack.

Dylan Ferrandis
Monster Energy Star Yamaha Racing
“I felt really good all day. The track conditions were good too. Unfortunately we didn’t get results we were looking for. I don’t understand what happened on the first lap (of the Main). Someone crashed in front of me and I couldn’t escape it. After that, I just rode to try to save some points, but I’m pretty frustrated about that of course. It is how it is. We’ll go back to training next week and get ready for A2.”