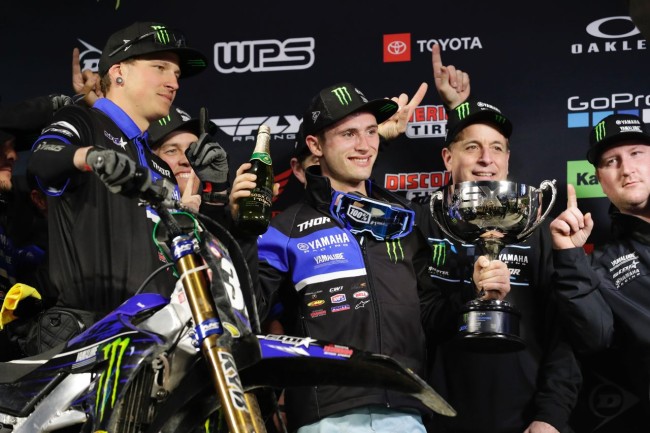 Justin Cooper checked one New Year’s resolution off the list with his first Monster Energy AMA Supercross 250SX win at the series’ season opener in front of a sell-out crowd at the Angels Stadium of Anaheim. Joining him on the podium was teammate Dylan Ferrandis to cap off a stellar night for the Monster Energy Star Yamaha Racing squad.

Straight out of the gate, the Yamaha YZ250F riders looked to be the front runners on the technical track. Ferrandis was the fastest qualifier and Cooper right behind him. They went on to take a win in their respective Heat races, with the Frenchman once again leading the way with pole position.

When the gate dropped for the Main Event it was the New Yorker that had the advantage. He got off to a good start and battled for the lead in second, while the defending champ had to recover from a bad start in seventh. Cooper was patient and rode a smart race. After the race leader made an error, he moved to the front and held onto it to score his first career win in the class.

Further back, Ferrandis had to work his way through traffic. By the halfway mark, the tenacious Frenchman was up into third and chasing down the leaders. He also was able to capitalize on the competition’s error to move into second, but there wasn’t enough time left to close the gap on his teammate and challenge for the win. Although he was hoping for better, the second-place finish was a good start to his title defense.

The Monster Energy Star Yamaha Racing team heads east to St.Louis, Missouri, next Saturday, January 11, for Round 2 at the Dome at America’s Center.

Wil Hahn
Monster Energy Star Yamaha Racing Team Manager
“I’m at a loss for words. Today could not have gone any smoother. We were 1-2 in qualifying, swept the heat races and finished 1-2 in the race. I’m very proud to be a part of this Yamaha crew and look forward to more of this.”

Justin Cooper
Monster Energy Star Yamaha Racing
“It’s indescribable. Everyone says that about their first win, but it honestly it is. I felt like I needed to pinch myself after I went over the finish line. Looking up into the crowd and all the lights and realizing what I had just accomplished – my first win at Anaheim — it’s unreal! I can’t wait to go home and sleep on it and see how I feel tomorrow. I really don’t want this feeling to end.”

Dylan Ferrandis
Monster Energy Star Yamaha Racing
“The day was good as a whole, I just got a bad start in the Main. I came back pretty strong, but I’m a little bit disappointed because I think I should have finished a little bit closer than I did. I was riding a little bit tight today. It’s the first one of the year, a lot of pressure, a lot going on. Everyone wants to win the first one. But it’s good. Last year, I finished second and went on to win the championship. So no problem, we’ll move on to next weekend.”