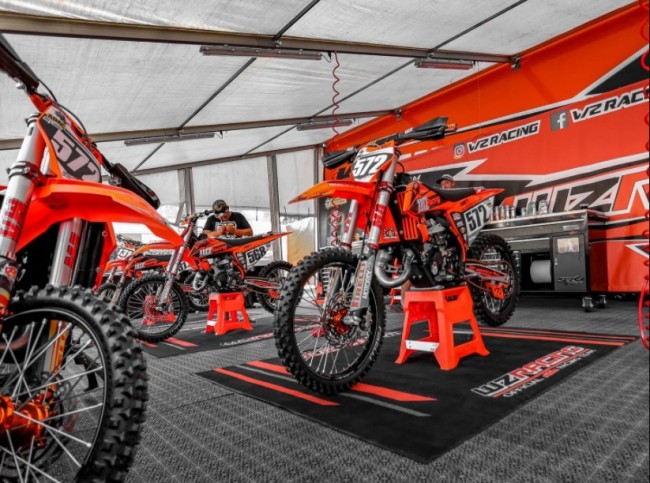 The WZ KTM Racing team have confirmed their rider line up for the 2021 European Championships.

Young Swiss talent, Mike Gwerder has signed for the team after a difficult rookie EMX250 season with injuries. Gwerder moves from the VRT KTM team over to the WZ KTM and is familiar with the manufacturer – he’ll be hoping to stay fit for the entire 2021 season to show his true potential.

Rasmus Pedersen has been with the team for a number of years now contesting the EMX125 class and for 2021 he stays with the team but makes the move up to the EMX250 class. The young Dann has a lovely smooth style so should suit the 250cc. He’ll be hoping to learn as much as he can during his rookie season in a very competitive class.

The team will also run German talent, Cato Nickel in the EMX125 series. Nickel was with the team this year but injuries meant he missed the majority of the season. He showed during the first moto at Matterley Basin with a fourth place finish that he has potential.

The WZ KTM team are also thought to be stepping things up for the 2021 season as they’ll also run an MX2 World Championship team. We will bring you that news as and when it’s available.

Mike Gwerder: We had hoped for a new team with KTM Switzerland but then the person who wanted to do the team switched to Honda and then yep… Diego Clement helped me find a new team and asked Waldemar and handled a good deal with him. I waited long and I was not sure that I was going to be able to race EMX250 again. But now I think I’m in good hands with Waldemar. My expectations are to do my best after my injuries and yes my goal is to ride with the top riders at the front. A big thanks goes to Denis Birrer, KTM Switzerland boss Chris Attiger, Diego Clement, KTM Austria, Waldemar and my Family for what they do for me. It‘s unbelievable how much work they did for me that I can ride again in EMX250.

Rasmus Pedersen: For 2021, I will continue with WZ racing. I am really pleased to be a part of the team and I really enjoy being with them. Now I will focus on getting ready on the 250 and give it my best for my rookie year in the class and we will see were we end up. But a big thanks to the boss at WZ and everybody in the team! I am looking forward for the season and getting some riding in.